Doctor Who: The Next Doctor 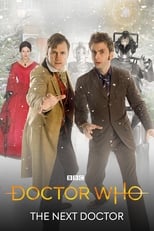 Release: Dec. 25th, 2008
Runtime: 1 hour
The Doctor arrives in Victorian London. It's Christmas, but snow isn't the only thing descending on the tranquil and jubilant civilization, as familiar silver giants from an alternate reality are amassing in numbers. The Cybermen are on the move again, and the only beings who can stop them are the Doctor and... another Doctor?

We didn't find any linked discussions for this film. Here are the results of a quick search of possibly related threads:
313 Doctor Who
Series Three of the new series started last night...who was watching? And what did you think? I thought it was a big step up from the Christmas special, which tried too hard to be funny and often fa...
74 Casting the New Doctor Who
I was thinking this week that if I was doing Doctor Who and had no limitations, I'd be asking Michael Shannon. I think he's a good fit for the character. Unfortunately there are limitations ....
5 Doctor Who: The Time War
Hello and welcome to my Doctor Who-themed tournament game. If you're interested in playing, just pick a side and follow the rules below. RULES Players are only allowed one time and/or space vehicl...
17 Doctor Movies
So basically I'm a medical student and our university is having a movie night. Everyone is going to bring in a movie about Doctors. So before I bring one in can you guys name your favorite movie about...
3 Man Goes Back to College to be a Doctor
I absolutely can't think of the title and it's on the tip of my tongue. This guy (Bill Murray I think... but no luck when I looked) goes back to college to be a doctor, he meets a girl and does absolu...