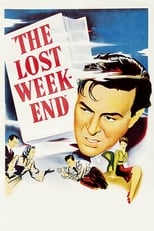 Release: Nov. 29th, 1945
Runtime: 1 hour, 41 minutes
Don Birnam, a long-time alcoholic, has been sober for ten days and appears to be over the worst... but his craving has just become more insidious. Evading a country weekend planned by his brother and girlfriend, he begins a four-day bender that just might be his last - one way or another.

Cobpyth I'm a pretty 'consuming' alcohol drinker myself (although I wouldn't call myself an alcoholic as I don't need it and can stop drinking it for more than a month without having any real problems) and very much enjoy the student life, which is of course full of alcoholic adventures, but I've also experienced and seen some of its darker sides already.
READ REVIEW

Jeff Costello His interactions with his girlfriend Helen (Jane Wyman) were probably one of my favourite scenes, but were at the same time very saddening, as we later learn Don pushed her away because of his own insecurities and inability to escape the jaws of alcoholism, I like how we've got to see retrospective insight in Don's past and the roots of his addiction.
READ REVIEW

Citizen Rules Ray Milland is one of the all time great actors and he knocks it back as the self loathing alcoholic that is fighting the bottle and losing as he goes on a 4 day drinking binge...aka a bender.
READ REVIEW
View All (4)