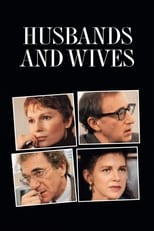 Release: Sep. 18th, 1992
Runtime: 1 hour, 48 minutes
When Jack and Sally announce that they're splitting up, this comes as a shock to their best friends Gabe and Judy. Maybe mostly because they also are drifting apart and are now being made aware of it. So while Jack and Sally try to go on and meet new people, the marriage of Gabe and Judy gets more and more strained, and they begin to find themselves being attracted to other people.

5 HELP!: two wives try to kill each others husbands
Synopsis: I'm looking for a movie about 2 wives agreeing to kill each others husbands... through sex. From what i remember is they plan to drug the husbands and through sex give them a heart attack o...
59 My List of TV's Worst Husbands
One of the first lists I ever did was of my favorite TV dads and I thought I would look at the other layer of those characters. Being a great TV dad doesn't necessarily make you a great husband and y...
11 The Stepford Wives
Finally managed to watch the 1975 original Stepford Wives today. Thought it would wet my taste buds for my viewing of the re-make with Nicole Kidman and Bette Midler later this year. I must say i thor...
1 Have you any knowledge Army wives
Hi guys I am ronek have you any knowledge Army wives movie pls send me ...
1 A Letter to Three Wives (1949)
A Letter to Three Wives (1949) won an Academy Award for Best Director and Best Writing, Screenplay and was nominated for Best Picture. It was okay for a film of the era. Kirk Douglas, Jeanne Crai...

Gideon58 The film introduces us to Gabe (Woody) and Judy (Mia Farrow) a supposedly happily married couple, who are rocked by the calmly-delivered news that their best friends Jack (Sydney Pollack) and Sally (Judy Davis) are planning to divorce.
READ REVIEW