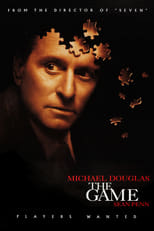 Release: Sep. 12th, 1997
Runtime: 2 hours, 9 minutes
In honor of his birthday, San Francisco banker Nicholas Van Orton, a financial genius and a cold-hearted loner, receives an unusual present from his younger brother, Conrad: a gift certificate to play a unique kind of game. In nearly a nanosecond, Nicholas finds himself consumed by a dangerous set of ever-changing rules, unable to distinguish where the charade ends and reality begins.

JayDee From very early on I assumed it was all going to be a game but the longer the film went and the more he was put though I started to think 'no there's no way, they can't possibly justify it.
READ REVIEW

Omnizoa All told, The Game, though suffering from one of the most generic titles in existence, is one of my favorite movies and an under-appreciated classic in it's genre where I hold it up alongside the likes of Inception.
READ REVIEW

TheUsualSuspect The Game is a worthy film if you are looking for a suspenseful thriller..
READ REVIEW
View All (9)