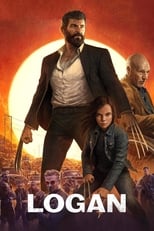 Release: Feb. 28th, 2017
Runtime: 2 hours, 15 minutes
In the near future, a weary Logan cares for an ailing Professor X in a hideout on the Mexican border. But Logan's attempts to hide from the world and his legacy are upended when a young mutant arrives, pursued by dark forces.

TheUsualSuspect At one point in the film, the characters are watching the western film Shane, if you are familiar with the film, you'll immediately see the parallels with Logan.
READ REVIEW

ShopkeeperTriumph Now, why'll I wouldn't say I would rank this nearly as high as The Dark Knight, my favorite superhero film, I get why a lot of people are bringing that one up, it definitely does something pretty different than what we expect from a comic book film these days.
READ REVIEW

Sarge Dafne Keen (above as Laura) is superb in this film and she could have a big future in this business either exploring this character or simply in other films.
READ REVIEW
View All (5)