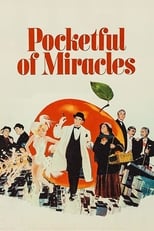 Release: Dec. 18th, 1961
Runtime: 2 hours, 16 minutes
Damon Runyon's fairytale, sweet and funny, is told by director Frank Capra. Boozy, brassy Apple Annie, a beggar with a basket of apples, is as much as part of downtown New York as old Broadway itself. Bootlegger Dave the Dude is a sucker for her apples --- he thinks they bring him luck. But Dave and girlfriend Queenie Martin need a lot more than luck when it turns out that Annie is in a jam and only they can help: Annie's daughter Louise, who...

1 Miracles
I found this series recently. It stars Skeet Ulrich (who always looks sick and like he is about to cry) and Angus Macfadyen. It's intriguing and creepy! I just wonder if it goes anywhere. I've only w...

Gideon58 Annie admits to Dave that she has exaggerated about her life in the letters that she has written to her daughter, so Dave, with the assistance of his moll, Queenie Martin (Hope Lange) decide they are going to make Annie appear like a queen for her daughter's visit.
READ REVIEW