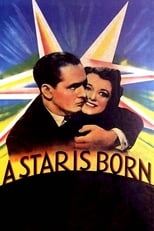 Release: Apr. 27th, 1937
Runtime: 1 hour, 51 minutes
Esther Blodgett is just another starry-eyed farm kid trying to break into the movies. Waitressing at a Hollywood party, she catches the eye of alcoholic star Norman Maine, is given a test, and is caught up in the Hollywood glamor machine (ruthlessly satirized). She and her idol Norman marry; but his career abruptly dwindles to nothing.

22 A Star is Born
Anybody interested to see Clint Eastwood's "A Star is Born"? I know people think Beyonce is oversaturated, but I do think she at least has vocal talent, now as for acting... Anyway, they'r...
3 My A STAR IS BORN Breakdown
Now that I have FINALLY seen all four versions of this classic Hollywood story, including a re-watch of the 2018 version last night, I discovered that all four versions have their virtues and ...
1 'A Star Is Born' Soundtrack
A Star is Born is currently the most talked about movie in the world. It highlights the musical prowess and natural acting ability of Lady Gaga, and the surprisingly good singing ability of Bradley...
14 Bradley Cooper and A Star Is Born
Is this part of Bradley Cooper's transition from playing regular guy roles to larger than life roles ? Is he aiming for that super stardom with this movie ? His last two movies sucked so he took a lon...

Gideon58 Norman does a screen test with Esther, whose name is changed to Vicki Lester, and they end up doing a movie together that makes Esther/Vicki the hottest ticket in Hollywood, but Norman's career continues a steady decline, which forces Norman deeper into the bottle.
READ REVIEW