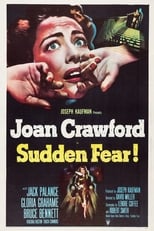 Release: Aug. 1st, 1952
Runtime: 1 hour, 50 minutes
Actor Lester Blaine has all but landed the lead in Myra Hudson's new play when Myra vetoes him because, to her, he doesn't look like a "romantic leading man." On a train from New York to San Francisco, Blaine sets out to prove Myra wrong...by romancing her. Is he sincere, or does he have a dark ulterior motive?

Gideon58 The film is a little longer than it needs to be and I must confess to a moment or two that, for me, produced unintentional giggles...I loved the scene where Myra learns what her husband and his mistress are planning, but the fantasy sequence that immediately follows where Myra starts imagining how her husband might be planning to murder her just made me laugh and I don't think it was supposed to.
READ REVIEW