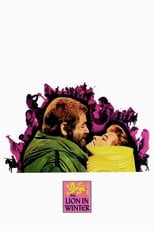 Release: Jan. 1st, 1968
Runtime: 2 hours, 14 minutes
1183 AD: King Henry II's three sons all want to inherit the throne, but he won't commit to a choice. They and his wife variously plot to force him. An aging and conniving King Henry II of England and Ireland plans a reunion where he hopes to name his successor. He summons the following people for the holiday at his chateau and primary residence in Chinon, Anjou, within the Angevin Empire of medieval France: his scheming but imprisoned wife...

We didn't find any linked discussions for this film. Here are the results of a quick search of possibly related threads:
49 January '16 Movie of the Month: The Lion in Winter
For January's Movie of the Month, I nominate: The Lion in Winter. I had this at number three for my 60's list submission. In retrospect, that was quite high but I did it for strategic reasons. ...
1 The Lion King
Well I searched and didnt see this movie up there. If there is already one of these then im sorry, and for someone to move it. please and thanks in advance. im still new at this. anyways... What di...
11 The Lion King DVD
Why the hell is it so hard to get? There is not a new DVD release until 2001 at the earliest. a Blu-ray release/DVD re-release of The Lion King is not expected until 2011 the earli...
0 Lion of the Desert
Has anyone seen it? Its made by Mostapha Akkad who also made all of the "Halloween" movies. about this man: Omar Mukhtar. I have to admit, its one of the saddest movies I've ever seen...
40 The Lion King
The Lion King is getting adapted in a live-action form in the same vein as the live-action Jungle Book with Jon Favreau directing. Voiceover Cast: Donald Glover as Simba James Earl Jones as Mufasa S...

Citizen Rules Synopsis: In Britain in the year 1183, King Henry II is an elderly King with three sons, all who want to inherit his throne.
READ REVIEW

Gideon58 It is 1183 AD as the viewer is boldly introduced to the primary players on this cinematic chessboard: King Henry II (Peter O'Toole) is the conflicted monarch trying to decide which of his three sons will inherit the crown; Eleanor of Aquitaine (Katharine Hepburn) is the queen in name only who is k....
READ REVIEW