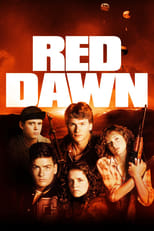 Release: Aug. 10th, 1984
Runtime: 1 hour, 54 minutes
It is the dawn of World War III. In mid-western America, a group of teenagers band together to defend their town—and their country—from invading Soviet forces.

The Gunslinger45 In fact this movie was considered the most violent movie at the time in terms of number of violent acts on screen.
READ REVIEW