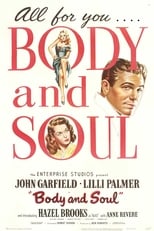 Release: Nov. 9th, 1947
Runtime: 1 hour, 44 minutes
Charley Davis, against the wishes of his mother, becomes a boxer. As he becomes more successful the fighter becomes surrounded by shady characters, including an unethical promoter named Roberts, who tempt the man with a number of vices. Charley finds himself faced with increasingly difficult choices.

Citizen Rules I don't follow boxing but Garfield looked like he knew his way around the ring.
READ REVIEW