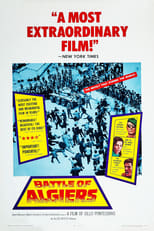 Release: Sep. 8th, 1966
Runtime: 2 hours, 1 minute
Tracing the struggle of the Algerian Front de Liberation Nationale to gain freedom from French colonial rule as seen through the eyes of Ali from his start as a petty thief to his rise to prominence in the organisation and capture by the French in 1957. The film traces the rebels' struggle and the increasingly extreme measures taken by the French government to quell the revolt.

Thief Also, despite the filmmaker's restrain in regards to the situation, I think the film succeeds in showing the unwanted effects of "Western colonization" in other cultures, and how the violence of the process (invasions, confiscations, eradication) will only breed more violence; but also that the hard....
READ REVIEW

Olivier Parent The characters of Ali and the colonel are really well introduce, the scenario make sens throughout the movie but the best part of the scenario is by far the speech about freedom made by Ben M'hidi and the multiple thoughts of colonel Mathieu that I will let you discover by yourself.
READ REVIEW