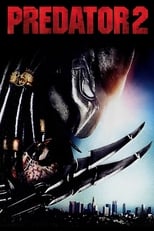 Release: Nov. 20th, 1990
Runtime: 1 hour, 48 minutes
Ten years after a band of mercenaries first battled a vicious alien, the invisible creature from another world has returned to Earth—and this time, it’s drawn to the gang-ruled and ravaged city of Los Angeles. When it starts murdering drug dealers, detective-lieutenant Mike Harrigan and his police force set out to capture the creature, ignoring warnings from a mysterious government agent to stay away.

Thief Predator 2 transplants the creature from the jungles of Latin America to the "street jungles" of Los Angeles which, on paper, is a rather clever idea for it to not be just a rehash of the first one.
READ REVIEW

The Rodent By far the best, and probably ever will be the best Predator movie and very close to being the best movie in my Library.
READ REVIEW

aronisred But even though the movie is subpar to the first, the filmmakers of this movie got exactly what was appealing about the first movie.
READ REVIEW