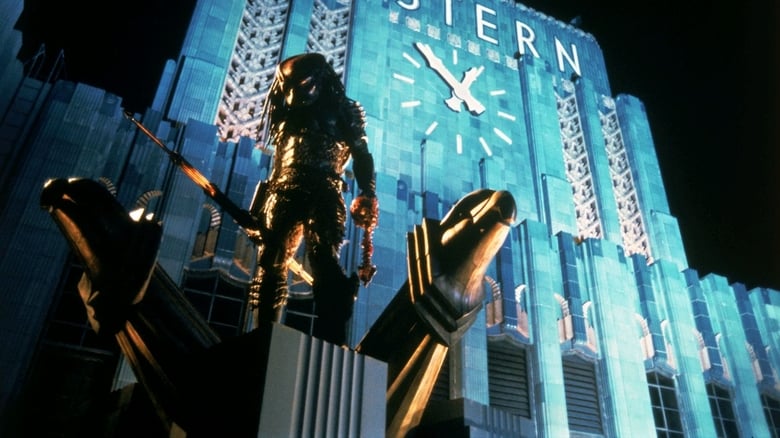 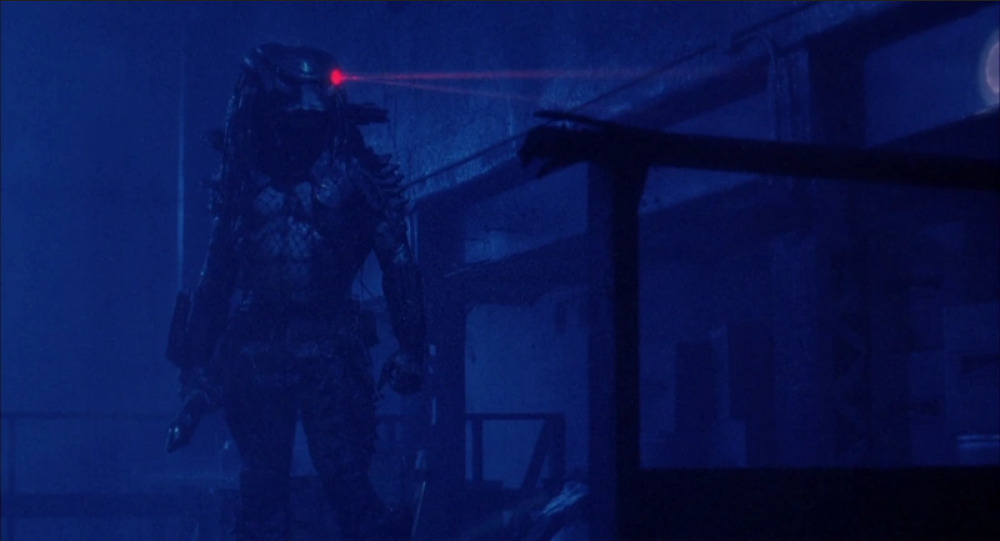 This review contains spoilers.
The original Predator starts off guns blazing but soon settles into a certain quiet suspense. It satirized the meatheaded action of Rambo: First Blood Part II and its ilk and deflated the bombast of those movies. Predator 2 followed the loose cannon cops of Die Hard and Lethal Weapon and takes a similar approach to its protagonist (who also starred in the latter, more on that later), but the effect is anything but deflationary or low key. This is an almost unceasingly cacophonous movie, one that feels like it might explode out of the screen at any moment. We begin with a shootout between cops and Latino gang members where the amount of gunfire exchanged feels closer to a war zone than the inner cities. Characters are shouting and blasting away, or themselves getting shouted at or blasted to pieces, with an unlucky few getting brutalized by the Predator itself. Even worse is that the movie gives the impression of being set during a heat wave, so that characters are drenched in sweat and additionally aggravated. (It also probably doesn’t help that the gang leader prepares for battle by sticking a palmful of cocaine in his face.) This opening shootout feels like a scene set right in the fires of hell.

The movie is so intense in this respect that the characters even bond through shouting matches. Hero cop Danny Glover greets hotshot new recruit Bill Paxton by chewing him out, which I suppose is better than Maria Conchito Alonso greeting him by crushing his balls in the middle of a crowded police station. Glover was supposed to be old in Lethal Weapon, too old for this shit, one might say, and he seems even older here, perhaps because he’s wearing what looks like a Depression era suit. (The ‘90s were very much an age of hideously baggy tailoring, as the relaxed silhouettes pioneered by Giorgio Armani ballooned to embarrassing proportions, but this thing looks like it’s been sitting in Glover’s closet for over half a century.) Paxton is very much in slicked back douchebag mode, but it’s Paxton so he manages to make us like him anyway. (It helps that he seems to yell less than many other characters.) Glover gets his ass chewed out by his politicking superior Robert Davi, and regularly butts heads with sinister government agent Gary Busey, who is always accompanied by a bunch of lackeys in sunglasses and windbreakers and plays his scenes in classic Busey fashion, snarling and chewing his lines like a lion feasting on a gazelle.

In terms of what’s actually shown onscreen at any given moment, the movie is perhaps not more violent than the average hard R release at the time outside of a few key moments. But the movie feels extremely violent, the corrosive atmosphere giving every squib and gore gag and additional kick, and the Predator’s habit of leaving corpses strung up from the ceiling feels additionally unnerving. Roger Ebert likened the movie to angry, ugly dreams, and while it wasn’t a compliment, I think he captures the movie’s essence perfectly. This sense of excess carries throughout the action, with the brutal murders of a group of Jamaican gang members and a massacre on the subway (the latter captured with a stylish strobing effect) both playing out to harrowing results. This movie, like many action movies of the era, was not what you’d call racially sensitive, and its depiction of Jamaicans in particular is indefensible. I must ask though, was there a reason this particular group was singled out in 1990 by both this movie and Marked for Death? (The latter at least presents us with some positive Jamaican characters and has a character address his own prejudice late in the movie to cover its ass.) It seems like a very specific demographic group to target for fearmongering.

The cacophony lessens sonically but amplifies visually during the movie’s best scene, where government agents plan to trap the Predator in a slaughterhouse. The temperature seems to drop significantly as we cut between the freezing blue interiors of the slaughterhouse, all surfaces bathed in frosty radioactive dust while the agents traipse through it in their dehumanizing hazmat suits, and the darkroom-red interior of the control room, where the hero and a few others watch the action unfold, the steady beeping of all the monitors and displays slowly building suspense. This scene borrows heavily from the initial ambush in Aliens, but if you’re going to steal, steal from the best, and this kicks a fair amount of ass. Director Stephen Hopkins is no James Cameron, Ridley Scott or John McTiernan (all of whom this movie owes some debt to), but the sturdy level of craft, atmosphere of brutality and bursts of style converge very nicely in this one sequence and make most of the other action scenes pretty diverting too. And hell, even Gary Busey gets to kick a little ass in this scene, if only for a minute or so. In Gary We Trust.

I still think the finale with Glover in his old age taking on the Predator in hand-to-hand combat is extremely lame, but I think this has grown on me quite a bit, considering I used to think the whole movie kind of sucked. Maybe because my appreciation for this era of filmmaking has grown and The Predator (one of the most embarrassing things I’ve seen from a major studio) has given me some perspective, but barring the unfortunate racial aspects, I thought the movie held up quite nicely.