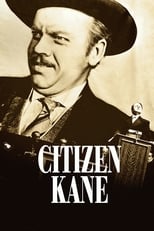 Release: Apr. 30th, 1941
Runtime: 1 hour, 59 minutes
Newspaper magnate, Charles Foster Kane is taken from his mother as a boy and made the ward of a rich industrialist. As a result, every well-meaning, tyrannical or self-destructive move he makes for the rest of his life appears in some way to be a reaction to that deeply wounding event.

We didn't find any linked discussions for this film. Here are the results of a quick search of possibly related threads:
50 Citizen Kane
I finally rented it today. It's be on my to-see list for years. What's it like for those who've witnessed it?...
2 Citizen Kane Homage
I'm trying to compile a list of films that pay direct visual homage to Citizen Kane. Anyone have any suggestions of specific moments in a film? So far I have Jurassic Park, The Man Who Wasn't There,...
13 Blibby Needs MOFO's HELP! Citizen Kane!
Hey Dudes, the time has come, i call on your collective uber brains of movie knowledge to help me out. Please! (If this thread is in the wrong section, my apologies ) I am currently writing an ess...
5 Citizen Kane - 80 years old today!
Citizen Kane premiered 80 years ago today. Rejoice! ...
2 My Final Thoughts on Citizen Kane.
I just finished watching Citizen Kane for the second time since I felt that my expectations for Citizen Kane were too high and too different the first time and therefore I did not enjoy it. But after ...

mark f After the newsreel ends, the director seems to want to find a hook into Kane's life and focuses on the great man's final word Rosebud to try to find out what made him tick.
READ REVIEW

Gideon58 The film opens with an authentic looking newsreel centered on the death of one Charles Foster Kane, an enigmatic and newspaper publisher and politician, which has moved several members of the media to find out who the real Charles Kane was.
READ REVIEW