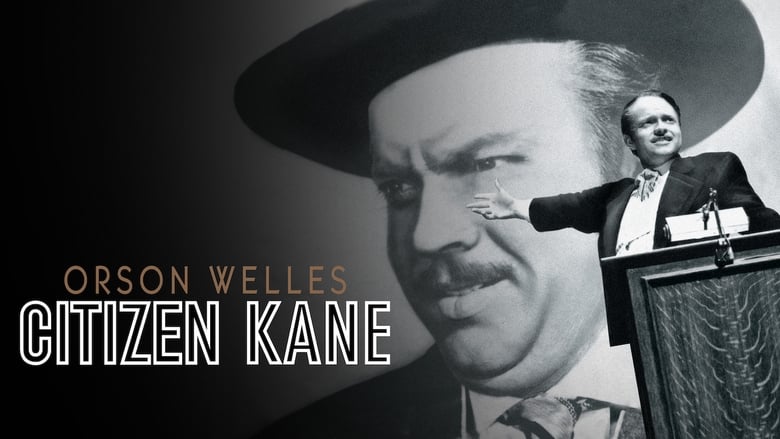 I loved the way the silent title of the movie segued into the fence outside Xanadu and focused on the "No Trespassing" sign; it basically tells you right up front that Kane does not want you meddling in his personal affairs but then the film attempts to do so. The camera climbs the fence and proceeds to get closer to the main building, passing the remnants of a zoo (Hearst Castle had a zoo) and a golf course. Eventually we get close to the one light on in the main building which goes off and then comes back on. Cut to the snow globe, Kane's lips, "Rosebud", globe gets dropped and broken as the nurse walks in and finds that Kane is dead.

After that we get the News on the March newsreel which delineates Kane's life and shows many views of the man. I especially like the scene on the balcony where Kane is with Hitler and the implication that Kane supported him before he knew any better. After the newsreel ends, the director seems to want to find a hook into Kane's life and focuses on the great man's final word Rosebud to try to find out what made him tick. However, the first few people seem to have no idea of what Rosebud is. However, Gregg Toland's photography highlights the use of saturated rear lighting and the way it causes people's extremities to darken and extend that light. Brenda said, "It reminds me of (the scene where Sally sings "Maybe This Time" in Cabaret.

After the death of the main character, it segues into a long newsreel about his life story. The beginning is so audacious that it throws a lot of first-time viewers for a loop. Not only that, but as you begin to get your bearings, the film introduces a number of elderly characters who all reminisce about Kane, so now we see him from many different perspectives, but they aren't always in chronological order and some of them are contradictory. So, once again, the narrative is completely unusual, and Welles and his fellow artists continue to catch you off guard by using overlapping dialogue, deep focus photography, special effects to make things seem larger than they are, extensive makeup work on almost every actor seen in the film during various times in their lives, an intense and haunting Bernard Herrmann score, which coupled with bizarre sound effects and strange editing (the scene where the bird cackles, the scene where the photograph comes to life, the photographic journey up to the opera house rafters during a particular "aria", and hundreds more). All these directorial choices just make the film more enjoyable and dense for the watcher, but once again, some people do not like films where they do not like the characters. I don't know. It seems to me that several modern directors have become famous for highlighting some of the most unlikable characters ever, and among those I would include Martin Scorsese and Christopher Nolan

I believe that Rosebud's use is two-fold. It's obviously meant to humanize Kane at the end of the film. At the beginning, we have no idea what Rosebud could be although we are given the clue of the snow globe falling out of Kane's hands when he says it. The beginning uses Rosebud as the entire basis of what turns out to be the "plot" of the movie. How are we going to go about trying to find out the soul of this dead man who the world knows a lot of but cannot really understand what makes him tick. Therefore, Rosebud is the clothesline from which the various witnesses are strung in an attempt to crack the nut of Citizen Kane. The fact that no one surviving or studied is able to illuminate Rosebud's meaning is significant but actually fades well into the background for a while until the film reaches its conclusion. It's only in the film's final moments, after we've seen Kane at his most-selfish-and-despotic, that Rosebud returns as something important to show that the man may truly have been just a child at heart. Rosebud certainly relates to Kane's innocence and is also somewhat explainable as the reason why he initially runs his newspaper as if he were a kid in a candy store. Kane did start out as someone who just seemed to have fun with all the things he inherited but eventually he thought of them and all his friends and employees more as possessions rather than toys or things for him to entertain himself, his cohorts and hopefully the world.

You see, I don't believe that Kane ever lost "Rosebud". After all, it was at Xanadu and he could have found it if he truly desired that. What he lost was the meaning of Rosebud and he only recalled it on his deathbed. It's as if Kane's life flashed before his eyes (sort of like the newsreel which immediately comes on directly after his death) and the thing which made him happiest of all was Rosebud. At the end of the movie we see that Kane and Rosebud are both going to the same place -- to ashes. It's tragic, yes, but what it really means is that Kane is just another man. No matter how rich and influential you are during life, you can't take it with you and you'll never really separate yourself from the simplest, humblest soul on Earth, except that perhaps that person may live a life filled with his/her Rosebud and not need to try to find a substitute by collecting objects and people. It may not be profound but it still turns the movie and the man into a tragic figure. Think about it. If we never learned what Rosebud was, most people wouldn't think as highly of the film. At least that's my opinion.