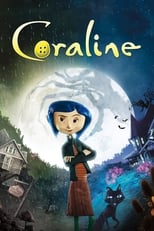 Release: Feb. 5th, 2009
Runtime: 1 hour, 40 minutes
When Coraline moves to an old house, she feels bored and neglected by her parents. She finds a hidden door with a bricked up passage. During the night, she crosses the passage and finds a parallel world where everybody has buttons instead of eyes, with caring parents and all her dreams coming true. When the Other Mother invites Coraline to stay in her world forever, the girl refuses and finds that the alternate reality where she is trapped is...

We didn't find any linked discussions for this film. Here are the results of a quick search of possibly related threads:
3 Coraline
In this family fantasy animation, a young girl (Fanning) walks through a secret door in her new home and discovers an alternate version of her life... Set for theaters in February 2009 (no official d...
1 Coraline
Forget about: Transformers, Wolverine, Terminator, Harry Potter. There is finally a film being released that has me excited! Coraline From director Henery Selick Getting rave reviews and has alr...
3 Coraline
I'm not here to post a intelligent opinion but I love Wybie(other Wybie) and Coraline call me a 12 year old girl all you want, i just felt the need to post it...
2 Intertextuality in Coraline
I've found some myself, but if anybody has anything to add it would be very helpful. During the two old womens performance this is shown, where one of the old ladies take "Venus'" place. It...
4 Is the upcoming movie paranorman the sequel of coraline?
Is the upcoming movie paranorman the sequel of coraline?...

Holden Pike A dark and visually jaw-dropping kid's movie that is probably much too scary for kids, Coraline is the story of a little girl tempted into a Through the Looking Glass world where the magic wonders mask a sinister purpose.
READ REVIEW

The Rodent It transpired that Gaiman was a fan of Selicks work on Nightmare, so the two collaborated, albeit with a few changes in the script to make the film longer than the 47 minutes they were originally looking at and we the audience were treated to this brilliant animated film which went on to being nomin....
READ REVIEW

Iroquois The mirror characters are distinguished by the fact that their eyes are black buttons and the mirror universe itself is full of weirdly colourful characters and things that start off enchanting but make for a very organic transition towards the nightmarish as Coraline realises that this seemingly id....
READ REVIEW
View All (4)