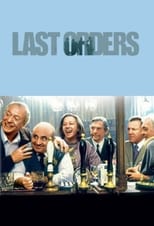 Release: Sep. 10th, 2001
Runtime: 1 hour, 49 minutes
Jack Dodd was a London butcher who enjoyed a pint with his mates for over 50 years. When he died, he died as he lived, with a smile on his face watching a horse race on which he had bet, with borrowed money. But before he died he had a final request, 'Last Orders', that his ashes be scattered in the sea at Margate. The movie follows his mates, Ray, Lenny and Vic and his foster son Vince as they journey to the sea with the ashes. Along the way...

We didn't find any linked discussions for this film. Here are the results of a quick search of possibly related threads:
1 Last Orders
I was able to see Last Orders tonight. It was well worth the outing, through the cold and rain. Adapted (very well) from the Graham Swift novel, this English import stars a Mount Rushmore of that i...
2 DVD Pre-orders
I haven't many DVD's on pre-order and one the main ones I want was put back by a few months and really want it come out soon. Currently on pre-order I have: A Long way Down - due 31st of July T...
3 Husband orders assassination of his wife and regrets (B&W 1940's)
This is a black & white film maybe from 1940's and maybe it's American. The husband orders assassination of his wife (or mistress). At the end of the movie the husband calls the wife to hear ...
7 Harry Truman Orders The Friendly Mushroom Bombing of His Top 250 Films
Haha...Surprised I never made a Truman joke before. Though in all seriousness, I know I have not been active AT ALL here for like the past 6+ months. I have only made comments in the politic...
12 Judge orders internet site to disclose member information regarding anonymous trolls
I thought this was pertinent - Forum article - ARS Technica...