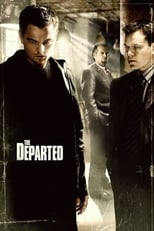 Release: Oct. 5th, 2006
Runtime: 2 hours, 31 minutes
To take down South Boston's Irish Mafia, the police send in one of their own to infiltrate the underworld, not realizing the syndicate has done likewise. While an undercover cop curries favor with the mob kingpin, a career criminal rises through the police ranks. But both sides soon discover there's a mole among them.

6 Ending of The Departed
Why did Mark Wahlberg kill Matt Damon at the end? At first, I just assumed it was because he didn't like Matt Damon, and he found out he was the rat, which made him hate him more. Now, I'm wondering...
11 The Departed
So I just watched the departed and I'm kinda confused and wondering what exactly the twist was supposed to be and every time I look it up I just get people not discussing it but just saying it has a l...

Iroquois someone is still left to kill Damon's character and give the film a "happy" ending, which I absolutely hate when it comes to this film because it seems like an easy way out for Damon's character, who is clearly so miserable by the end of the film that letting him live with his mistakes would seem to....
READ REVIEW

Rockatansky Both characters struggle with their identities and the increasingly tense web they've spun throughout the film, but DiCaprio has the last laugh from beyond the grave.
READ REVIEW

TheUsualSuspect Thank you Mr. Scorsese, for letting me have fun at the movies again..
READ REVIEW
View All (9)