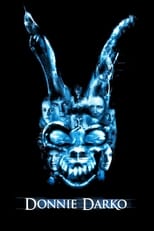 Release: Jan. 18th, 2001
Runtime: 1 hour, 53 minutes
After narrowly escaping a bizarre accident, a troubled teenager is plagued by visions of a large bunny rabbit that manipulates him to commit a series of crimes.

6 Were the subplots necessary in Donnie Darko?
I think I like the movie overall, but it's hard to decide, because I really like the main character's plot, but I feel that the Drew Barrymore subplot and the Patrick Swayze subplot, just don't seem t...

Citizen Rules This is more of a psychological Sci fi movie, akin to a 21st century Twilight Zone episode...punched up and brought to the big screen.
READ REVIEW

TylerDurden99 I plead with you, if you're going to watch Donnie Darko, watch the theatrical cut, not the director's cut.
READ REVIEW

LordSlaytan So when he asks Donnie that question, I dont believe hes trying to tell him that hes traveling in time, rather that Donnie has the capability to do it himself.
READ REVIEW