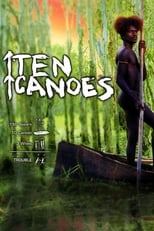 Release: Jun. 29th, 2006
Runtime: 1 hour, 30 minutes
A story within a story within a story. In Australia's Northern Territory, an Aboriginal narrator tells a story about his ancestors on a goose hunt. A youngster on the hunt is being tempted to adultery with his elder brother's wife, so an elder tells him a story from the mythical past about how evil can slip in and cause havoc unless prevented by virtue according to customary tribal law.

Takoma11 A younger man, Dayindi (Jamie Gulpilil, yes, son of David Gulpilil) has designs on one of his brother's wives.
READ REVIEW