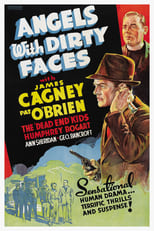 Release: Nov. 26th, 1938
Runtime: 1 hour, 37 minutes
In New York, the boys Rocky Sullivan and Jerry Connelly are best friends and small time thieves. After a robbery, Rocky is arrested and sent to a reformatory school, where he begins his criminal career. Jerry escapes and later becomes a priest. After three years in prison, Rocky is released and demands the return of $100,000 deposited with his solicitor - prior to his jail term.

We didn't find any linked discussions for this film. Here are the results of a quick search of possibly related threads:
2 The Man of a 1,000 faces.
I am speaking of Lon Chaney, I'm not sure if many are as aware of him now a-days, (after all he was an actor in the "silent film" era.), but for any movie fan I definately encourage see...
5 Faces of Death Blu-Ray
Faces of Death has been officialy released on US Blu-Ray fully uncut, Good news for the horror fans , I have bought this already and it is well worth the money. ...
18 Smilie Faces!
Just testing out all of our smilie faces: :bawl: Not bad, huh? I'll probably add more as the need grows (IE: more users and such). [Edited by TWTCommish on 08-30-2000]...
211 Actors With Great Faces
I'm not talking about actors who are Adonises (although I'm not excluding them either), but just actors (or actresses) who have great, eye-catching, very distinctive, or even unusual faces for the scr...
1 The Two Faces of January (Viggo Mortensen)
Set in Greece and Crete 1962, The Two Faces of January is a solid understated thriller with first class performances. A wealthy couple, Chester and Collette (Viggo Mortensen and Kirsten Dunst) attract...