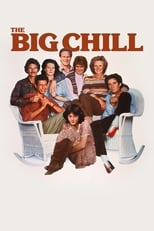 Release: Sep. 9th, 1983
Runtime: 1 hour, 45 minutes
A couple's marital troubles are put on hold while they host an unhappy reunion of former college pals gathered for the funeral of one of their own, a suicide victim named Alex. As the weekend unfolds, the friends catch up with each other, play the music of their youth, reminisce, smoke marijuana, and pair off with each other.

0 Netflix and Chill
Alright gang, Let's see what everyone's favorite movies and TV series are that can be watched on netflix. What do you guys have? I'm going to have to post a personal favorite, a documentary, it's cal...

DalekbusterScreen5 Sometimes it does suffer from pacing issues that make it feel as though it would work better as a sitcom and Chloe doesn't feel as well-developed as the other characters but overall The Big Chill is a very funny comedy film that's well worth a watch.
READ REVIEW

Gideon58 The original screenplay included scenes with Alex, who was played by Kevin Costner, but, in a stroke of genius, it was decide to delete all of the Alex scenes in the film, lending a wonderful air of mystery to the character of Alex and allowing the audience more input as to why Alex decided to end his life.
READ REVIEW