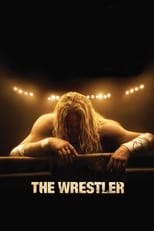 Release: Sep. 7th, 2008
Runtime: 1 hour, 49 minutes
Aging wrestler Randy "The Ram" Robinson is long past his prime but still ready and rarin' to go on the pro-wrestling circuit. After a particularly brutal beating, however, Randy hangs up his tights, pursues a serious relationship with a long-in-the-tooth stripper, and tries to reconnect with his estranged daughter. But he can't resist the lure of the ring and readies himself for a comeback.

We didn't find any linked discussions for this film. Here are the results of a quick search of possibly related threads:
13 The Wrestler (2008)
I'm a new member of this forum and this is my first review, and I thought I'd write it on the most recent movie I've seen, The Wrestler. The Wrestler is a new type of film for Darren Aronofsky, who...
27 The Wrestler (2008)
Authors Note: This is my first ever movie review, guys. I write video-game reviews for my school paper, and I watch a ton of movies, so I figure I should find out how to write reviews of them. I'm sur...
24 Darren Aronofsky's The Wrestler
Sounds pretty interesting... "Randy 'Ram' Robinson (Mickey Rourke) is a retired professional wrestler from the 1980s who is forced to retire after a heart attack threatens to kill him the next...
2 A review of wrestler Kurt Angle's first film, END GAME!
In 2009, an...interesting director by the name of Bruce Koehler made a crappy low budget "thriller" about a criminal who takes pleasure in kidnapping, assault and deranged murder, while a ...
1 R.I.P. Nicole Bass (wrestler, Howard Stern Show)
Deleted...

NO RATING
mjhhiv The world of wrestling entertainment is something not explored in many movies, and it works as a perfect backdrop to show the true story: that being one of hardship, loneliness, sadness, humor, love, and passion..
READ REVIEW

Lennon As I've implied, I really dug this movie, like a whole lot. Mostly for Rourke's incredible performance..
READ REVIEW

meatwadsprite The more I think about [I]The Wrestler[/I] , the better I realize it is. Everything that happens ties in so well with each other....
READ REVIEW
View All (8)