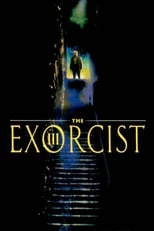 Release: Aug. 17th, 1990
Runtime: 1 hour, 50 minutes
Set fifteen years after the original film, The Exorcist III centers around the philosophical Lieutenant William F. Kinderman who is investigating a baffling series of murders around Georgetown that all contain the hallmarks of The Gemini, a deceased serial killer. It eventually leads him to a catatonic patient in a psychiatric hospital who has recently started to speak, claiming he is the The Gemini and detailing the murders, but bears a...

Sir Toose I don't mean to suggest that there is absolutely nothing wrong with this film, there are some overdone parts (one has Fabio in it ), particularly in the end, but all in all Exorcist III is a very well crafted example of the horror genre and well worth a watch even to non genre fans.
READ REVIEW

pahaK The Exorcist III is a neo-noir horror that builds upon the events of the first film but is stylistically very different.
READ REVIEW