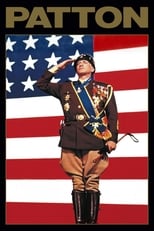 Release: Jan. 25th, 1970
Runtime: 2 hours, 52 minutes
"Patton" tells the tale of General George S. Patton, famous tank commander of World War II. The film begins with patton's career in North Africa and progresses through the invasion of Germany and the fall of the Third Reich. Side plots also speak of Patton's numerous faults such his temper and habit towards insubordination.

3 Patton Oswalt
Patton Oswalt Delivers Moving Emmys Tribute to Wife: 'I Am Lucky to Have Had That In My Life' Patton Oswalt took home the Emmy for outstanding writing for a variety special and touchingly referred ...

Iroquois Despite its fairly straightforward premise of following an American general as he waged war across multiple countries during World War II, Patton has a fairly surprising take on its titular protagonist.
READ REVIEW

KeyserCorleone Desiring to change that, I had a hard time finding classics like the heist film Le Cercle Rouge and the Italian film The Conformist in ENglish, I stuck with the war film Patton.
READ REVIEW