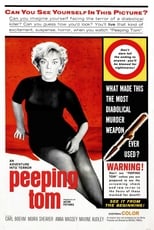 Release: Apr. 6th, 1960
Runtime: 1 hour, 41 minutes
Loner Mark Lewis works at a film studio during the day and, at night, takes racy photographs of women. Also he's making a documentary on fear, which involves recording the reactions of victims as he murders them. He befriends Helen, the daughter of the family living in the apartment below his, and he tells her vaguely about the movie he is making.

We didn't find any linked discussions for this film. Here are the results of a quick search of possibly related threads:
8 Repugnant Architecture Peeping Black Sheep Pervert movie
I saw a movie that was most likely made between 2000-2012, there is a peeping tom black sheep who is either a juvenile or a grown child who watches the female lead when she is having sex with someone,...
11 Is There A Better Voyeuristic Movie Than "Peeping Tom"
Movies are voyeuristic by nature, but when you watch something like "Peeping Tom", it's twice as good. Another good thing is that you can experience all that, without getting into trouble ...

Captain Spaulding Unlike Psycho, which relied on clumsy dialogue to diagnose and deliver Bates's back story, Peeping Tom uses a much more effective method: Mark, at Helen's insistence, rolls footage from his youth that shows his dad waking him in the middle of the night, purposely frightening him, throwing lizards on....
READ REVIEW

mark f Visual storytelling genius Michael Powell teamed up with scripter Leo Marks to make this audacious film which predated Psycho by months and was lambasted by the British critics as a "sexual snuff" film at the time of its release.
READ REVIEW