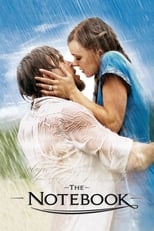 Release: Jun. 25th, 2004
Runtime: 2 hours, 3 minutes
An epic love story centered around an older man who reads aloud to a woman with Alzheimer's. From a faded notebook, the old man's words bring to life the story about a couple who is separated by World War II, and is then passionately reunited, seven years later, after they have taken different paths.

0 The Notebook
Does anyone know the song that plays during the commercial of the movie The Notebook?...
5 some sketches towards a film notebook
Hope this thread doesn't break any rules. I put this up thinking I would do reviews, but then wavered. I find that a lot of times I review things in response to other people or whole threads, so havi...
11 Daniel's Film Notebook
Instead of posting in the movie tab every now and again I thought it would be a good idea to create a thread for myself where I not only share ratings of films, but also other movie related thoughts a...
5 A Young Doctor's Notebook, on Ovation
This upcoming four-part series, starring Mad Men's Jon Hamm and Harry Potter's Daniel Radcliffe, looks absolutely fascinating... and gory! Coming in October... I'm setting the DVR as early as possi...

Gideon58 Director Nick Cassavetes, whose previous directorial credits include action-filled dramas like Alpha Dog, surprises with a delicate hand at mounting a romantic melodrama that provides all the classic landmarks in a story but provides a few surprises along the way as well.
READ REVIEW

Iroquois This goes on for a while and is intermittently broken up by the framing story involving two residents of a nursing home as one (James Garner) reads a book (presumably the titular notebook) containing the story to the other (Gena Rowlands).
READ REVIEW