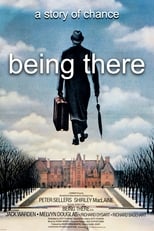 Release: Dec. 19th, 1979
Runtime: 2 hours, 10 minutes
A simple-minded gardener named Chance has spent all his life in the Washington D.C. house of an old man. When the man dies, Chance is put out on the street with no knowledge of the world except what he has learned from television.

TheUsualSuspect The entire time I was expecting people around him to finally clue in and the whole charade to come crashing down, I like that it never did though, it made the film feel "sweeter" if that makes sense.
READ REVIEW

Iroquois Being There may not exactly deliver hearty laughs and it's disappointing how the film's final image has become iconic to the point that it'd practically spoiled, but it is the kind of warm yet bittersweet film that I've come to expect from Ashby.
READ REVIEW

Takoma11 While the surface level humor of course exists in the space between what Chance says and does and how others interpret that (for example, a feverish rush to find out who he is leads several politicians to assume he may be a high-level operative), what gives the film an extra lift is simply the contr....
READ REVIEW
View All (5)