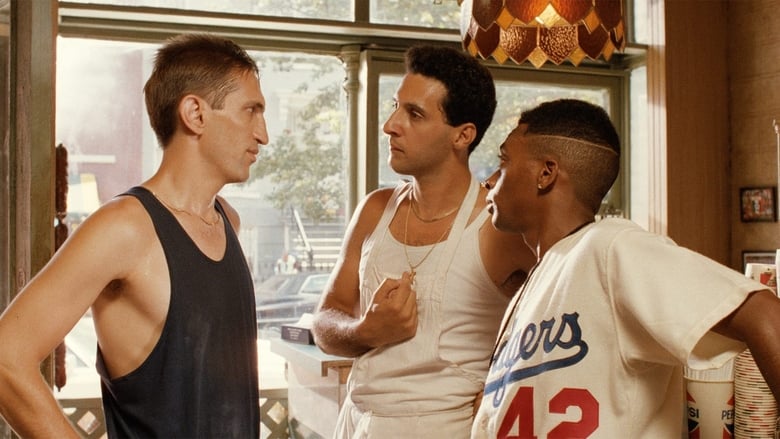 Thoughts: I enjoy the style and flair of this early Spike Lee joint, all set within a single sweltering Brooklyn day as the neighborhood goes about its business battling the heat, their lives, racism, and of course each other. Lee seems to follow Aristotle’s unity of time which says great drama must take place within a day, and while I don’t always agree, I think the time frame is the only way to set this film. The lighting, hues of yellow, orange, and brown – shadows on the buildings and streets – activities of shop owners and patrons all serve to give the film a sense of time of day. The beginning of the film is morning and the end of the film is that night – appropriately so.

Getting beyond some of the flamboyant 80’s styles and a slight over use of Radio Raheem (Bill Nunn) playing Public Enemy’s “Fight the Power” may be difficult at first for some viewers, but this is a period piece - a slice of life out of Spike Lee’s book and late 80’s Brooklyn as he knew it, so I can’t really fault the film. Few films deal with racism as candidly. The derogatory slurs machine gun their way to the viewer, as the Italians, Koreans, and Blacks are all dealing with their racial prejudice and preconceptions. I greatly admire how the movie never tends to take sides or let any of the groups off the hook. Racism can be inflicted on and inflicted by any group. This is well handled in a point of view sequence with various characters dropping slurs left and right into the camera, putting the viewer in the shoes of the recipients.

Danny Aiello shines as Sal the Italian pizzeria owner, and John Turturro plays his disgusted and hate filled son. Both parts headline a cast which also includes smaller roles for wonderful actors Ossie Davis, Ruby Dee, Rosie Perez, Samuel Jackson, and John Savage. Spike Lee probably gets the most screen time as he acts within his own film and the title could refer to many things, but most likely it’s the action Lee’s character Mookie takes at the film’s climax. Does Mookie do the right thing? I say no, he does not, but after listening to interviews and commentary with Spike Lee, I’m not so sure the director would agree with me. But that’s the beauty of the film in that Lee is restrained and non-manipulative and despite having his own opinion, he is able to tell the story marvelously and let the viewer decide. The film moves slow and is not burdened down with plot, but rather it shows characters and ideas. Interactions. I showed this movie to one of my classes and they ask, “What’s this movie about? What’s the story?” I reply it’s not about that. Do the Right Thing concludes with Lee offering two opposing points of view – a quote from Martin Luther King Jr. and another from Malcom X. We know which view Lee agrees with. He never made a movie about Martin Luther King Jr. Best scene: Sal and Pino are alone sitting inside their pizzeria during the afternoon – hottest part of the day, and open up with each other . Pino desperately wants out of the neighborhood away from the blacks, while Sal explains how they’re a part of the neighborhood, business, and their livelihood. The conversation starts smoothly enough and a low tempo smooth jazz plays in the background, but tensions soon rise. Pino is not listening to reason, despite his father’s best attempts, and Sal as played by Danny Aiello is at his pleading best, “Why you got so much anger in you.” This simple quote can really represent the entire film and the social message. Hate and racism comes from anger and redirected hate, not reason and logic. Sal goes on to say, “They grew up on my food, and I’m proud of that.” Another great line showing how the character understands what is important, if only he can hold on to his ideology above his anger. Technically it’s a great cinematic moment. The camera slowly dollies in toward them as the scene progresses and the jazz music speeds up and becomes a frantic bebop style with the sax filling for flared emotions.