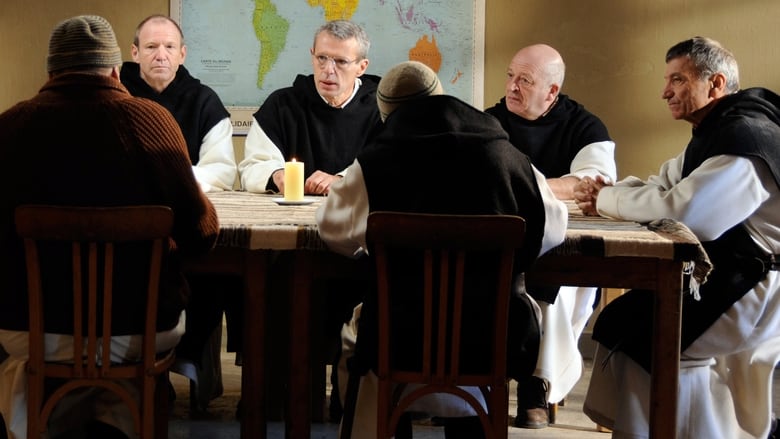 Of Gods and Men

Docudrama about a small group of Trappist monks in 1990s Algeria who became martyrs after refusing to leave their monastery when armed Islamists in the region began targeting Christians and foreigners. In a small mountain town of Tibhirine, the eight French monks who have lived there for generations coexist in harmony with the almost completely Muslim community around them. The monastery has the only doctor for hundreds of miles, and both the townspeople and the monks respectfully observe and participate in each other's rituals and observances. It is a nearly perfect dynamic, borne of years of harmony and trust. But when Muslim extremists start uprising throughout Algeria, the French and Algerian governments urge the monks to leave, or at the very least accept a military platoon for protection. Their leader, Christian (Lambert Wilson), immediately decides to stay without guns, and the others agree. But on Christmas night when a cadre of armed men show up needing medical attention for their leader, they are faced with how dangerous their choice is. The Algerian military isn't much more understanding or less threatening themselves. After much debate and deliberation, the eight men take another vote, and though a few of them are frightened they ultimately decide to stay, putting their faith in God and their love of the community above their own personal safety.

Very straightforward if well made, and with the ultimate fate of these monks known the narrative isn't focused on suspense, instead quietly observing the character of such men. The cast is good, especially Lambert Wilson who is well suited for the most faithful of the monks, Michael Lonsdale is perfect as the doctor in robes, Olivier Rabourdin as the youngest and most doubtful monk, and Jacques Herlin brings the few moments of levity as the oldest of the men. It's a nice, watchable effort, beautifully photographed, highlighting a true story, but hardly more than that. Not enough artistry or ambition to be anything more than an efficient Sunday School primer.