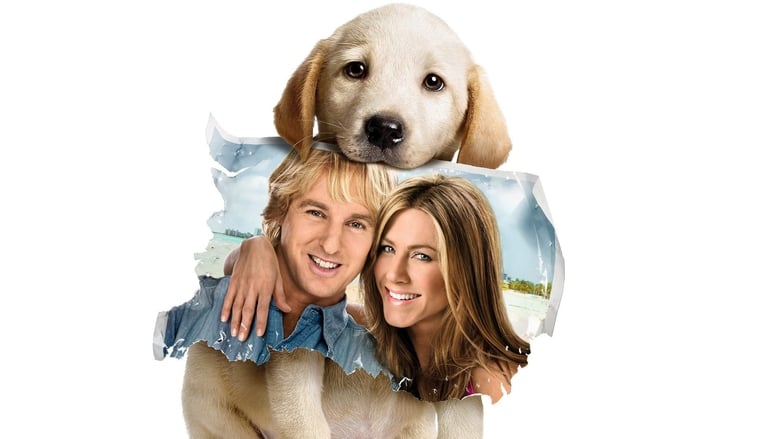 The fascinating thing about Marley and Me is that you walk into the theatre thinking the film is about a dog. After all, Marley's picture is the central image on that poster up there. But the truth is.... Marley and Me isn't really about the dog at all.

And depending on your point of view, this is either fine with you or it isn't.

Marley and Me is based on a book which was based on a series of columns written by John Grogan. Apparently, Grogan's ramblings about the "worst dog in the world," along with his family's adventures with said dog became extremely popular with his readers. I'm not surprised that a story about a misbehaving, yet lovable, lab would make for fun reading; I'm just not sure this story translated as well to film. Many times, I found myself wondering how the events sounded in a newspaper column. I bet they were hysterical. And I imagine if I had known about Grogan's column, I would have been a regular reader. Yet, it isn't as if this film doesn't work. Because it does. It truly does.

On a cold Christmas night, my son and I walked out of the theatre a tad bit wiped out. We had to sit for a bit before we left. I know I needed to gather my emotions. And Matt.... well, he tried to remember how many times he had ever cried during a movie. He told me that The Fox and the Hound was one of the most memorable movies he'd seen where he cried. And he "shed a tear" at the end of this movie, he told me. I did, too. I nearly hyperventilated. We decided that this Christmas would be one to remember.

We also decided that our dog, Macey, another rather misbehaving dog because she has this tendency to pee on my carpet, deserved a nice long hug when we got home. Because, after all, she's part of the family.

The real story of Marley and Me isn't about Marley's life, as much as it is about what a dog means to our lives. How the dog's mere existence adds that magical element of unconditional love that every family strives for, and I'm not talking about the unconditional love that our dog showers on us. Oh, yea, that's the message Grogan reminds us of at the end, but the story is really about Grogan and his wife's unconditional love toward the dog. Not only to Marley, but to each other, and to their children. This is a story about a family.

As corny as that sounds, this is a rather magical story after all. There's a scene -- and I won't spoil it -- about a necklace that bookends this film and I didn't see it coming. It's a rather perfect moment. The moment my son shed his tear. The moment where the entire film comes together.

The star of this film is.... no, I'm not going to say Marley. Sure, he's cute, but when you realize that 13 dogs played Marley since this story covers Marley's entire life, there isn't really one dog to latch onto as a favorite. See, that's what I meant when I said the story isn't really about a dog. It's about the "me," part of the title -- Grogan, or in this case, Owen Wilson. He's the true star and I challenge anyone not to feel a lump in their throat when he delivers his speech to Marley telling him he isn't really the "worst dog in the world" after all. Owen Wilson is a gift. He can make even the most mundane moments mean something. And he can make important moments mean something even more.

What an absolute joy it is that Owen Wilson makes movies. To be honest, that's what went through my mind right when we left the theatre.

That, and that hug Macey was going to get when we arrived home.