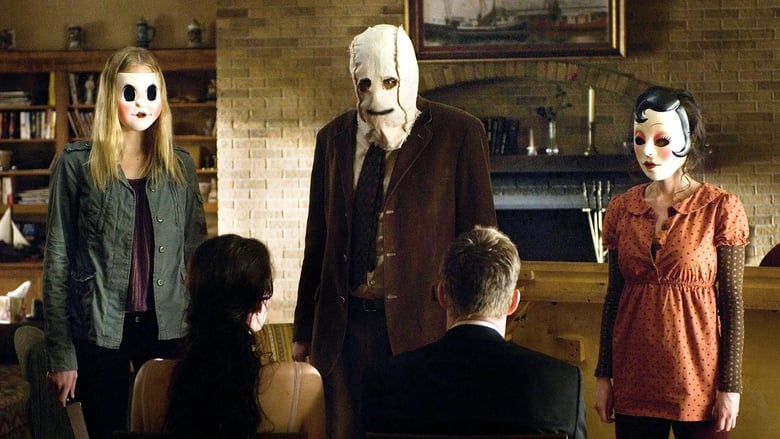 The Basics:
The Strangers, in a nutshell, is the story of a troubled couple who spend the night in the remote family home of the male protagonist, James, played by Scott Speedman. Through some unseen chain of events, the female lead, Kristen, played by Liv Tyler, has denied the marraige proposal of James and the two settle in for a long evening of sadness and melancholy over the event. At 4am in the morning someone knocks on the door and the real trouble of the evening ensues, leaving some dead folks in its wake. Heh, dead and wake, not a bad play on words there if I do say so myself. Anyway, its billed as a horror movie and it did have some of that in it to be sure.

My Take:
As I watched the first 30 minutes or so of this flick, I was pleasantly surprised by the complexity of the surroundings, the beautiful lighting, and most of all the music choices that accompanied the opening vignettes. I’m not sure what I was listening to but it sounded like some old jazz records that I have as well as some vintage country that I’ve run across before. I’ll have to research that but the point is that it was decidedly a break from the cheap metal riffs that usually accompany a horror flick today.

Out of all of the actors involved, nary a one of them did a bad job in delivering their characters. I think it’s fair to assume at this point that when Miss Liv (the gorgeous) graces the screen a quality performance will follow. I hadn’t seen Speedman in anything else that I remembered but he’s certainly a capable and believable actor. The three antagonists also did a swell job in not under or over playing their respective roles and I really dug Kip Week’s creepy labored breathing under the baghead mask.

So, at this point, I’ve been kind to the film. I complimented the cinematography, I’ve nodded with appreciation toward the soundtrack and I’ve even specifically singled out a few performances that I particularly enjoyed (Liv, if you read this, send me an email ;^) ). No doubt you’re reading with anticipation and trepidation and wondering to yourself ‘okay, so what’s the problem’? Okay then, I’ll tell you.

Nothing really except that about 3/4 of the way through the story begins to crumble. The antagonists, in the beginning, have a seemingly uncanny ability to pinpoint the precise locations of Kristen and James. They knock on walls right above the head of poor frightened Kristin, they set up a murder (really quite a good scene), they even know when James is going to attempt an escape and they foil his effort handily. Toward the end though, folk are just running around and there seems to be a distinct lack of purpose (and point). It was all pretty good in the way that horror films can be good, it was just non-cohesive for a while and it killed the momentum for me.

Now, on to the antagonists, shall we? Sometimes, to my disadvantage, I read up on weird stuff rather voraciously. I even have a site I’m working on (just starting really) to chronicle all of that but it’s best left there I think. I say ‘disadvantage’ because sometimes when watching a film I make references to things I’ve studied in the past and it interferes with my temporary suspension of disbelief. Anyway, being a 28 year student of the Tate LaBianca murder case I couldn’t help but notice the arrangement of two females and one male who set about to do the devil’s work. All are guilty of unconscionable acts in the story and the two females, like Manson girls Krenwinkle, Van Houten and Atkins, defy commonly associated feminine stereotypes. The male antagonist, baghead, I’ll call him, is actually very reminiscent of the descriptions of the killer given in the as yet unsolved Texas Moonlight Murders.

There is a really good film out there called The Town that Dreaded Sundown that gets specific about this case with the main point being that a masked killer seemingly randomly killed people in isolated places in a small-ish community. I must admit that I had a little trouble in being horrified by these villians due to their obvious nods toward past events. In fact, it made me feel a little like someone was trying to pull the wool over my eyes in the hopes that these bizarre folks, rooted in reality, had slipped my mind.

So, in summary, I thought it was a decent example of modern horror. That said, I’m generally NOT a fan of modern horror because I think most of it is cheap and unimaginitive (in contrast to horror masterpieces in years past). The Strangers at least tries to invoke some terror with crafty camera angles, great sound effects and the occasional ‘boo’ moments and it really does make a solid effort in setting the scene in a normal place and making the unfolding events feel like they could be happening to anyone.