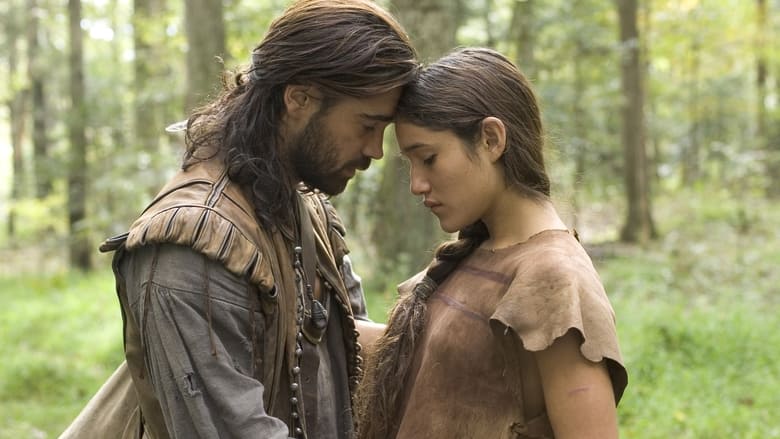 Terence Malick is a director you either get or you don't. Either you find his cinematic storytelling compelling to the point of breathtaking or you find it boring to the point of snoring. His latest movie - his fourth - is even more so going to divide audiences into one camp or the other. I happen to love Malick, and I don't think any fan of his work will be disappointed with The New World. Still, I'd have to rank it fourth of his work thus far. After only one viewing anyway. But that's also like ranking Beethoven symphonies.

In The New World Malick tackles the Seventeenth Century story of the Jamestown Colony in Virginia. But Malick is a filmmaker who isn't overly concerned with history in the grandest sense. The physical details recreated seem incredibly authentic, showing the dirty, small little fort in a bit of swampland as it must have been in 1607. But when it comes to the details of people, liberties are taken. These are along the same lines of liberties that have been taken over the last four hundred years as there has built a sort of myth around the names Captain John Smith and the young Powhatan princess Pocahontus, the native pleading with her chieftan father to spare his life and the romantic love affair that followed. Malick chooses to retell the myth...though he does it very much on his own terms. Colin Farrell is Smith and fifteen-year-old Q'Orianka Kilcher is Pocahontus. She does save him from execution that first year in the New World, and they do fall in love. But this is no Disney cartoon, and the beats and tenor of this legend are not the ones you may be used to. After Smith returns to Jamestown and the colonists manage (just barely) to survive the winter and hold off the natives long enough for more English to return in the spring in numbers big enough to truly make their presence and canons the power in the region, Smith leaves. The despondent and outcast Pocahontus eventually agrees to marry another of the settlers, John Rolfe (Christian Bale), though she never stops loving Smith in her heart.

If that sounds like the makings for a steamy, sweeping epic soap opera, you must not be at all familiar with the films of Terence Malick (Badlands, Days of Heaven, The Thin Red Line). The passion between Smith and Pocahontus is shown, to be sure, though without hardly any physical contact, and certainly no nudity or anything overtly sexual in the Hollywood sense. The love triangle between Pocahontus, Smith and Rolfe is painful and tragic, but without the two men even catching a glimpse of the other, much less pointed words and declarations of love or a dramatic duel with pistols or sabres. In fact for a two-hour and thirty-minute film, those unaccustomed to Malick may be surprised at how little dialogue there actually is. But the film speaks volumes. While they may not speak aloud to each other very often, we are privy to the thoughs of all three principle characters in voice over. And of course most importantly there are the visuals from Terry and cinematographer Emmanuel Lubezki (Sleepy Hollow, Y tu Mamá También). James Horner's score is also wonderful, especially the last crescendoing measures that end the movie and gave me chills.

The larger and more constant Malick themes of the natural world and how man is both juxtaposed and in harmony with it are on full display in The New World. Malick is a cinematic poet, which is really the key point of audience division. If you go into Terry's films expecting traditional narrative you will likely be frustrated, confused and bored by the images, no matter how beautiful. But if you open yourself up to his unique brand of storytelling, these are momentously engaging and emotionally moving films. Like The Thin Red Line some may wonder why some of the background characters seem to move in and out of the spotlight, or are thrust there for only one scene never to emerge again? The timeline of the editing can be confusing in the traditional linear sense, and your brain or the person next to you may be asking how did he get there, or what happened in between this scene and the last? Malick's narratives aren't concerned with aiming at those types of details for two and half hours, he's going after bigger game. And this is where you either do or don't go along with him on his poetic journeys. I definitely went with him to The New World, and can't wait to return.

And for the record, this is how I'd grade Malick's filmography....