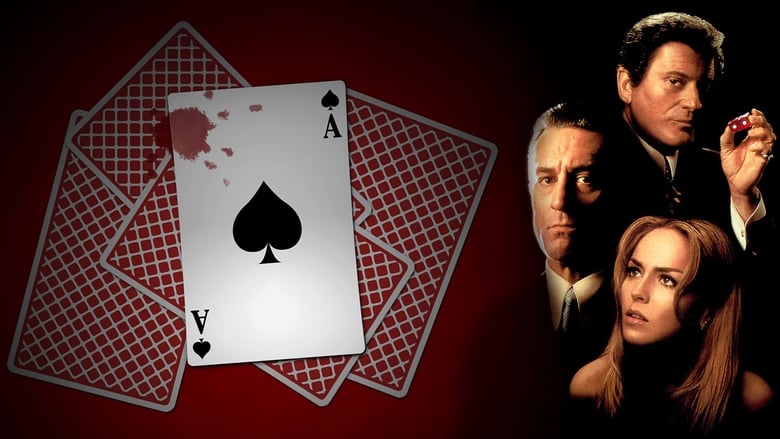 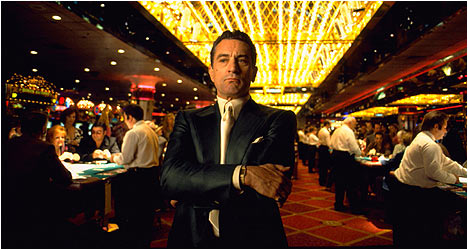 "When you love someone, you've gotta trust them. There's no other way. You've got to give
them the key to everything that's yours. Otherwise, what's the point? And, for a while, I believed
that's the kind of love I had."


Casino is too often dismissed as a GoodFellas retread. Yes, both films are about the Mafia, both have large arcs, both show some of the minutiae of crime, both star DeNiro and Pesci, but other than those basic surface elements the films are quite different. And while I think GoodFellas is Scorsese's masterpiece, Casino is damn good.

While GoodFellas wanted to look at a mid-level workaday gangster, Casino has a much larger aim in looking at the men who ran one of the operations in Las Vegas, a cash cow with yearly earnings that made the Luftansa heist seem like peanuts. This is a different level of corruption, not about stealing trucks and bribing individual cops but an empire of greed that involves politics and pension funds and the moving of hundreds of millions of dollars. On the other hand, Casino also tells the story of how such a huge and complex enterprise can be taken down by something as simple as infidelity and jealousy.

DeNiro plays Sam "Ace" Rothstein, who isn't affiliated with the Chicago Mob because of his ability to strong-arm or threaten anybody but because he is a master handicapper, a man with a natural gift for seeing all the angles in games of chance and sports betting, making him a good earner and valuable commodity in the organization. Nicky Santoro (Joe Pesci) on the other hand is the kind of cold-blooded enforcer more typically associated with the Mafia, and again although there are some surface similarities between Pesci's characters of Nicky here and Tommy in GoodFellas, while Santoro is just as violent he is less of a hothead. He will definitely hurt or kill anybody who gets in his way, but with less obvious psychosis than the unstable Tommy - though ultimately their fates are not dissimilar. Rothstein is given the Tangiers casino in Vegas to oversee, and Nicky is sent along as the muscle to back him up.

When they arrive in Las Vegas it isn't yet being plundered to full potential. Criminals from all over own most of the major interests, but there's only a very basic mechanism in place to skim off the top, and little attention is payed to the details of gambling and presentation. Ace changes all that, cleaning up the casino and making the cash flow even faster. There has also been little in Vegas by the way of loan sharking and kneecap busting and general menacing. Nicky changes all that, establishing himself and his crew as the badasses in town nobody dares cross. Between them they make the operation and the town more profitable than ever.

Everything is going great for a while, but the success starts going to Ace's head, and soon he almost forgets why he's there. He joins country clubs to become seen as a respectible member of the community and he becomes obsessed with detail to the point where he is enraged over how many blueberries are in the muffins served in the casino restaurant. He also thinks he's big enough and powerful enough that he need not take into account the locals and he steps on one too many toes. But the main sin in his downfall is getting involved with Ginger (Sharon Stone), a grifter of a working girl Ace decides he wants as his wife. He makes an unusual bargain with her, knowing she doesn't love him, that if they marry he will take care of her financially in a style that attracts her, and he says all he wants in return is the appearance of and attempt at a family. If love comes, hey, all the better, but if not he can live with that. Or so he says.

It's a horrible deal, but one Ginger is too enticed by to say no to. But Ginger never loves Sam, and eventually her greed and drug addiction bring her into too much conflict with Rothstein, clouding his judgement and marring the crime operations.

"A lot of holes in the desert, and a lot of problems are buried in those holes. But you gotta do it right. I mean,
you gotta have the hole already dug before you show up with a package in the trunk. Otherwise, you're
talking about a half-hour to forty-five minutes worth of digging. And who knows who's gonna come along in that
time? Pretty soon, you gotta dig a few more holes. You could be there all fu*kin' night."

Nicky, too, pisses off one person too many with his side schemes, and soon he is both banned by law from even entering a casino and even more foolishly he gets involved with Ginger, the one woman in that town he should have steered clear of. None of this is good for business, making the Mobsters in charge of it all back home much too nervous and none too happy. The Mob is not somebody you want to disappoint to the point of making them nervous and unhappy.

On the technical filmmaking side, Scorsese is at his height, and even at three hours the movie never seems long as his narrative style keeps it all moving and the inevitable arc of downfall is built and maintained masterfully. Like GoodFellas again voice-over is utilized, and he has a bit of fun with it too, as in Nicky's last voice-over which ends ubruptly and in agony. This is the first film where Marty worked with Robert Richardson as his cinematographer. Richardson had worked with John Sayles a couple times (Eight Men Out, City of Hope) but primarily had been Oliver Stone's D.P on everything from Salvador through Nixon. Casino is a beautifully shot movie, from the neon glitz of the casino itself to the desert vistas, just amazing to look at. Once again the screenplay is a collaboration with Nic Pileggi, and again the story is rooted in facts with only the names changed.

DeNiro is very strong as Ace Rothstein, a different character than he had played for Scorsese before. The road from Johnny Boy in Mean Streets to Ace in Casino is a fascinating one to watch, as all eight of the men Bob has became in Marty's films are very different from each other. The stubbornness of Ace and his blind-spot for Ginger are interesting turns in his persona. I don't think Pesci gets enough credit for his work here either, and in many ways Nicky is a much more fully drawn and complex character than Tommy in GoodFellas (though his best work is still as Joey LaMotta ion Raging Bull). I have never liked Sharon Stone, on screen or off, and likely never will - except that she is just perfect as Ginger. Great casting, and Stone does the drugged-up greedy bitch so very, very well here. The scene where she ties her young daughter to the bed so she can go out to drink, drug and screw whoever she wants is a powerful one - she falls apart wonderfully on screen. The diverse supporting cast is also right on the button, including Don Rickles pocketing his schtick and becoming a very convincing casino manager (plus having a legends like him and Alan King around just feels right in the recreation of the Vegas of yesteryears), Jimmy Woods as Ginger's ex-lover/pimp/whatever who she keeps running to, Kevin Pollak as one of the political intermediaries needed to make the town run for the Mob, Western and Peckinpah veteran L.Q. Jones as a local good ol' boy with more power than Ace realizes, and the omnipresent Frank Vincent as one of the other Mobsters - and I do love that after taking a beating from Pesci in Raging Bull and GoodFellas Vincent gets his revenge in Casino (boy does he ever).

In its three-hour running time Casino doesn't have a whole lot of on-screen violence, but the bursts that are included are among Scorsese's bloodiest and hardest to watch. The infamous head in the vise scene is actually outdone by that cornfield where Nicky and his brother meet their fate. And the story goes that after fighting the MPAA on movies like Taxi Driver and GoodFellas that Marty made those few violent scenes extra graphic so that when he was told to edit he had built-in-seconds to trim...but to his surprise the MPAA of 1995 had no objections to Casino going out as-is with an R rating. Such an unpredictible and silly body, the MPAA ratings board. But I digress....

In the end, Casino is also about not only the rise and fall of organized crime in Vegas but the perversion of the American dream in general, and with a final recognition of the different kind of Vegas that arose from the ashes of the old...

"The town will never be the same. After the Tangiers, the big corporations took it all over. Today it looks like Disneyland. And while the kids play cardboard pirates, Mommy and Daddy drop the house payments and Junior's college money on the poker slots. In the old days, dealers knew your name, what you drank, what you played. Today it's like checkin' into an airport. And if you order room service, you're lucky if you get it by Thursday. Today it's all gone. You get a whale show up with four million in a suitcase, and some twenty-five-year-old hotel school kid is gonna want his Social Security Number. After the Teamsters got knocked out of the box, the corporations tore down practically every one of the old casinos. And where did the money come from to rebuild the pyramids? Junk bonds."