The Legend of the Titanic 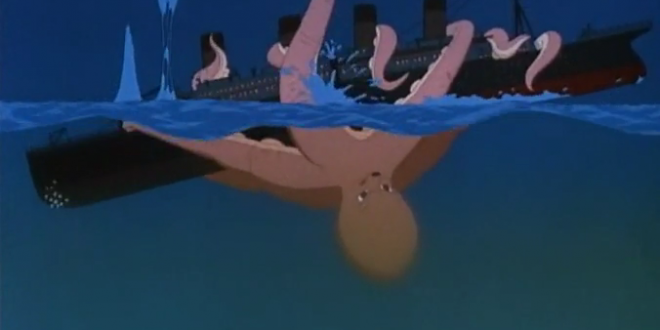 Especially the women! They just raise a ruckus and get in the way!

Aboard the Titanic, a group of men are engaged in a conspiracy to begin whaling in the Atlantic. A plucky group of mice and a young couple, along with some friendly sea creatures, try to foil the evil plot.

Anyway, yes, this movie is totally ridiculous and somehow manages to be bad in ways that the other film we watched about cartoon animals on the Titanic wasn't.

The animation is basic and lacks personality. The characters are likewise bland and make no impression.

But what's most offensive here is maybe the blithe way that the film plays with the real tragedy of the sinking. In the very first scene, the mouse telling the story asserts that people weren't really missing or dead after the sinking. Bwah?! As the plot---and I use that term really loosely--unfolds, the sense of gentle blasphemy never goes away. The iceberg? Panted there by an octopus who was tricked by some no-good sharks. Why didn't the ship steer away? The rudder was stalled by those same no-good sharks. Also, some characters for no apparent reason are able to talk to animals. This includes one of the bad guys and the two main characters.

It must be said, I'm not sure I've ever seen an animated character who was more unintentionally nightmare fuel than poor, dumb Tentacles. He looks like what would happen if a puppy, an octopus, and a bodybuilder went through the portals from The Fly together.

I love that the cover says "an animated classic." Talk about trying to manifest your destiny!