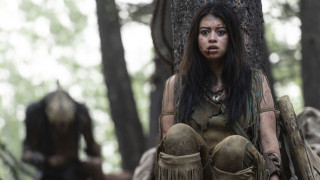 Naru (Amber Midthunder) is a young Comanche woman who dreams of being a valued hunter like her brother, Taabe (Dakota Beavers). But those hopes take a strange and dangerous turn when an alien Predator lands in their area and begins taking out anything it sees as a threat.

I watched this with a little group and we had an absolute blast with it.

First and foremost, I thought that the film looked amazing. The Canadian scenery is breathtaking, and the different angles and camera moves highlight the landscape and the characters in a really cool way. One particular shot---an overhead spinning shot of Naru atop a tree--was a real highlight. This extends to the way that the action is shot, which is clear and easy to follow.

As Naru, Midthunder is very likable and easy to root for. Yes, the script makes a few nods to her frustration with not being taken seriously, but a lot of the film is just Naru out in the wilderness, trying to survive and figure out the mystery of what is decimating the local wildlife. The rest of the cast is also good, including Beavers as her brother and Stormee Kipp as a fellow tribesman who is more hostile toward Naru. Of course, any discussion of the cast has to include Naru's canine companion, Sarii, played by a former shelter dog called Coco. Coco is a total scene stealer, and we unabashedly cheered for her during the whole film.

I'm a fan of the Predator films, with the original and Predators being my personal favorites. I liked this addition to the Predator mythology. The Predator we see here is a less advanced version of what we get in later films. The technology is more pared-down, something that could be explained either by the Predators themselves being less advanced, or an intentional choice to use less powerful weapons, like a hunter using a bow-and-arrow instead of a gun.

I had very few complaints with this one. I wish that the antagonism between the Comanche and the French trappers had been a bit more established. I appreciate that doing so would have added to the run time, and it's not the worst thing to get the Cliff's Notes version. But it would have added a bit more charge to the scenes where those characters intersect.

As an action/horror, this one delivered for me.