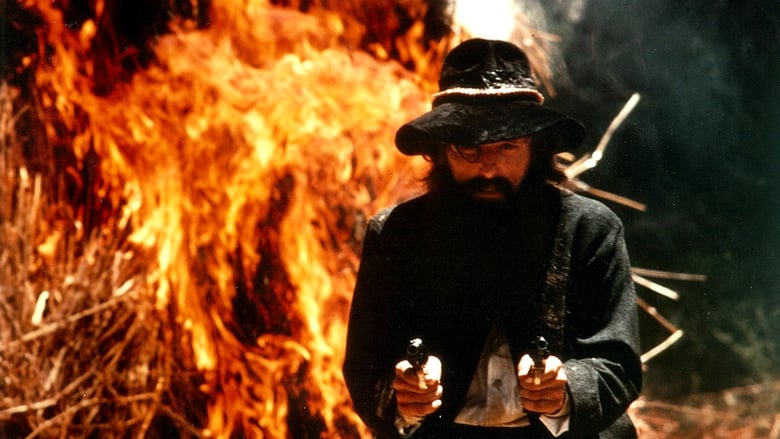 Mad Dog Morgan was made during Dennis Hopper’s “wilderness years”, and it seems like the perfect movie for that phase of his career. For one thing, it is set in the wilderness. But less literal-minded folks, the smarty pants edumacated types, will know that the “wilderness” here is a metaphor, for it was the part of his career when his career practically ended in Hollywood after lame-o studio executives buried The Last Movie and his substance abuse problems escalated. (If I got the literary device wrong, please forgive me, I’m not an English major.) I think that energy greatly colours his performance, which apparently was done under the influence of ill-advised amounts of rum (and I would wager other substances as well, although the IMDb trivia section does not confirm all that he ingested during filming). Hopper, here as in other roles, brings a real unpredictability to the proceedings. There’s a scene where his character stumbles onto a horse (if one can stumble up, this is what it would look like), fires his gun and unexpectedly wounds two people he considered to be his friends. While I’m sure they had to set up the cameras and rig the squibs, it genuinely feels like watching a drunken idiot **** around with a horse and a gun. I have not had first hand experience with substance abuse and I apologize if I’ve put any of this insensitively, I genuinely do love this man.

But you also get that kind of tortured mania that seemingly only Hopper can bring and brings so readily and so effortlessly. There’s a moment when he tells his friend David Gulpilil and tells him “I love you and I’ll always be your friend” and it feels like a transmission straight from his heart. It’s hard not to be moved by his sheer presence, although the movie does do a few things to get us on his side. The opening scene shows him to be sympathetic to Chinese settlers, only for them to be brutally murdered in a horrific scene of racist violence. His character then turns to robbery, only we see that he goes out of his way not to harm his victims, and then gets sentenced to a brutal stay in a prison that looks like a fortress, where he’s physically and sexually abused. These are brutal, oppressive times, and the movie argues that in the light of the injustice around him, the hero is maybe not so bad in comparison, even if Hopper imbues him with enough instability to make him dangerous, intentionally or otherwise. (I am not familiar enough with the real life historical figure to know how much this fudges the facts, but I would wager he’s much more sympathetic here than in real life.) The fact that this movie plays more like exploitation than arthouse (the massacre has some really gnarly violence) adds to this atmosphere. The movie was distributed in the US by Troma, although it plays things more straight than the campier genre fare they’re known for. (It’s also a lot better than anything I’ve seen from them, although I confess I haven’t dug too deep.)

Now, there’s one part where the hero tries to see how well he’s recovered from an injury by throwing a boomerang. Now, perhaps it wasn’t the intention, but as an ignorant Canadian whose only knowledge of Australia is through nature docs and Crocodiles Hunter and Dundee and that one episode of The Simpsons, I couldn’t help but laugh at something so blatantly stereotypical. But I do think the movie leans into satire, as when it juxtaposes the grim proceedings in the main plot with two government officials comparing bird calls, discussing evolution (and specifically whether the hero is more man or ape) and other such matters, as well as a scene where the hero throws a bunch of animal innards on a man who betrayed him, only for the man to think he had been disemboweled. There are also several scenes where we see characters speaking to the camera, trying to editorialize the proceedings while posing for carefully staged photographs. This is directed by Philippe Mora, best known for his Howling sequels. Howling III in particular shows a keen interest in Australian history, and that skeptical strain is present in this movie. Which also explains the ending, which I won’t reveal outright even though it’s based on historical events, but will note that it’s preceded by around twenty minutes of Hopper pestering the residents of a house he’s barged into, like a drunk who won’t leave you alone at the bar, and is followed by the government official assigning him the most undignified of fates. If you were looking for a grandiose ending, you won’t get it here.

Mora is maybe not the most polished director, but with the sheer presence of Hopper (whose character development is measured by the growth of his beard) and the surrounding wilderness (the attractive, slightly sunburned cinematography capturing what Werner Herzog calls the “voodoo of location”), the movie has a power beyond what mere technical finesse might offer. I suspect Mora didn’t have the easiest time making this movie, but he apparently thinks pretty highly of Hopper’s performance. (Difficult productions might be a recurring theme in Mora’s career. Howling II forced him to stick in a halfassed explanation about reverse evolution after the studio sent him Planet of the Apes costumes for his werewolf movie. I do genuinely like that film for its dopier, cheaper Hammer vibes, but it’s generally regarded as a “so bad it’s good” classic.) Now if I can end the review with two anecdotes about the movie, from this article by Mora about the production:


We flew to Taos, New Mexico, to meet Hopper after talking to his agent Robert Raison, who had also represented Cole Porter. Hopper greeted us at the rugged runway holding a rifle as we jumped off the single-engine plane. "That's our Mad Dog!" I thought – it was a bit like Zero Mostel in The Producers, shouting "That's our Hitler!"
A fitting note to start the movie.


In 1974 when we finished shooting Mad Dog Morgan, he rode off in costume, poured a bottle of O.P. rum into the real Morgan's grave in front of my mother Mirka Mora, drank one himself, got arrested and deported the next day, with a blood-alcohol reading that said he should have been clinically dead, according to the judge studying his alcohol tests.
And a fitting note to end it on.