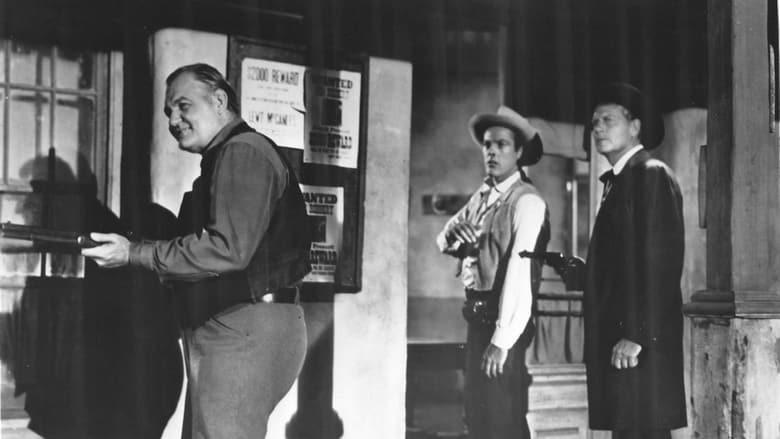 Judge Rick Thorne (Joel McCrea) arrives in a small town in Colorado that is essentially owned by a wealthy cattle family called the Bannermans. Thorne has arrived to bring Tom Bannerman (Kevin McCarthy) to trial for a killing that took place. But with the key witnesses (including the dead man's wife (Jaclynne Greene)) intimidated into silence and the town under the family's thumb, can Thorne bring the man to justice? Complicating matters is the romantic tension between Thorne and Amy Lee (Miroslava), Tom's cousin.

This was a short, sweet, and to-the-point Western. What I liked most about it was the way that it subverted a few predictable directions that it could have gone.

As the unflappable Judge Thorne, McCrea does a solid job. He manages to convey both a man who is studied and a proponent of the law, but at the same time a man who is comfortable riding into danger and using deadly force if needed. McCarthy also carries a surprising amount of the weight of the story, because he does a great job of embodying the sociopathic rich kid who doesn't fear consequences because daddy's got everyone--even the sheriff--in his pocket. Tom is so smarmy that you really, really want to see him get what's coming to him.

When it comes to the romance with Amy Lee, the film is a bit less successful. At first, I was really intrigued by her character. We are introduced to Amy Lee as she aims a revolver at Tom and shoots a cigar out of his hand and then shoots a jug nearby, something their patriarch compares to "two bear cubs playing around." But the movie ultimately seems to struggle about what to do with her. (Sidenote: Amy Lee being a crack shot BEGS to be important at the end. It isn't. Boo.). The story wants her to be a conspirator, but at the same time, it wants her to be naive as to the actions of her cousin and family. It just doesn't work. Everyone in town knows that Tom dragged a Mexican man to death behind a horse just for spilling a pot of coffee. But somehow that's news to Amy Lee, despite the fact that she is present (and participating!) at every big family conversation. But if Amy Lee is seen as too complicit, it makes her relationship with Thorne much more complicated, and the film clearly isn't interested in much more than the two of them making eyes at each other. (Okay, she does make one important decision in the last act, but it feels off-kilter because of what came before).

I enjoyed this Western---adapted from a Louis L'amour novel--and especially enjoyed the last 25 minutes.