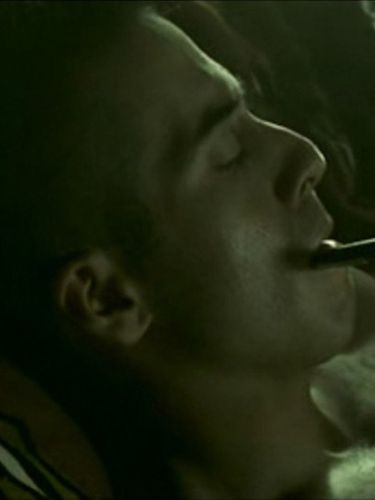 Santo (Kirk Acevedo) is good friends with artist Hunter (Isaach de Bankhole) and Hunter's girlfriend, Allie (Paz de la Huerta). All three are serious drug addicts. As a new show of Hunter's approaches, will the trio be able to survive their latest binge?

Oh, so I see that someone decided to just gather together everyone I had sort of a tangential crush on in the early 2000s (Aceveco, de Bankhole, de la Huerta, Mike Doyle). Neat. Unfortunately, the movie is kind of a mess.

The title of the film refers to the way that the trio lives---getting high for days at a time, then sleeping it off for 48 hours. A complication comes in the form of Santo's brother, Benny (Andre Royo), who wants Santo to get clean. That aspect of the film is fairly straightforward, if a bit cliched. The three central actors have an easy chemistry with each other, and they are believable as long-time friends.

But there is this weird--and I mean weird--subplot about how Santo and Hunter knew each other in a past life, with Santo having been a white blacksmith who helped Hunter's past-self slave escape. Through the film we are shown visions of this escape, and Santo himself frequently talks about visions that he has. Hunter himself is also "tuned in" to this past, and we see that he would rather paint crowd-pleasing floral scenes than engage with what's really happening on the inside. And this part, to me, was just way cheesy. On top of which, it also clashes a bit thematically with another big idea in the film, which is Hunter's inability to trust having come from an abusive background.

The actors are all likable, which really pull you through the film. But I found myself overall not very satisfied with the narrative itself or what it had to say about art and addiction. It also does something that I find so off-putting, which is to feature multiple sex scenes in which the men remain fully clothed (or framed off-camera except for their faces), but a ton of semi-nude or nude female bodies are put on display. The movie already suffers from looking low-budget, and these sequences gave it an unpleasant air of desperation.

Unless you are a really big fan of someone involved, probably one to avoid.