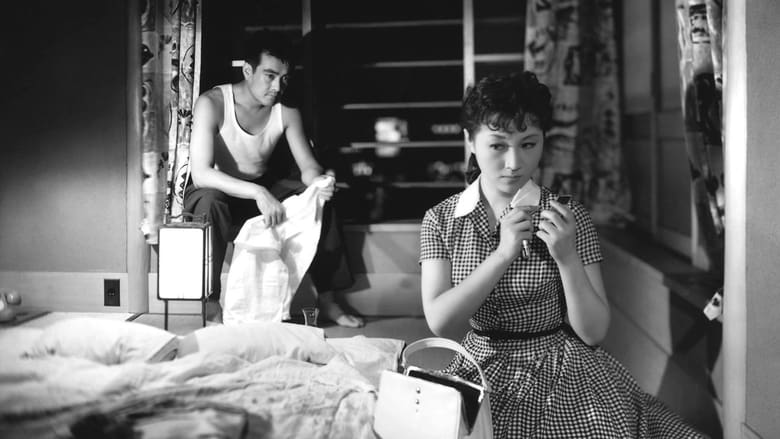 A man named Ishii (Takahiro Tamura) is the prime suspect in the killing of a pawnbroker. When Ishii goes off the radar, two police detectives, Yuki (Minoru Oki) and Shimooka (Seiji Miyaguchi) stake out the home of Sadako (Hideko Takamine), one of Ishii's former lovers. As the two watch Sadako, they become more invested in her personal life, and Yuki in particular takes an interest in her.

Another film from the Japanese Noir collection, and this one was very interesting.

The primary focus of most of the film is on helping us to try and understand Sadako's life, and just how Ishii might fit into it. There is a lot of speculation from the detectives--will she assist him? Turn him in? Will he kill her and then himself?--and we get different hints from other characters about Sadako's daily existence. Sadako is married to a very stingy man and is helping to raise children from his previous marriage. So is her mundane life an escape from something, or is it something from which she wants to escape?

There are two aspects of the film that are done very well, in my opinion. The first is the way that Yuki begins to project his own emotions onto Sadako. As he watches the way that she is treated and the mundane nature of her domestic life, he begins to speculate about how she must feel. In parallel form, he puts himself in the position of Ishii, thinking about how he might approach Sadako.

When Ishii finally does show up in the film, the movie takes a nice chunk of time to explore how he feels about Sadako and how she feels about him. Parts of this align with Yuki's ideas, while others do not. What Yuki finally begins to realize in the last act is the way that Sadako lacks agency, and even when she takes steps to gain some control over her life, there is always someone there (even Yuki himself) to shut her down.

While this is billed as a crime thriller, to me it was more of a drama. As Yuki and Shimooka continue their weeks-long stakeout, they are forced to a place of empathy with Sadako. For both Sadako and the police, Ishii would provide at least a source of excitement, even if he also brings a degree of danger with him.

I am a bit on the fence about how I feel about the number of scenes we get from inside Sadako's house or her neighbors'. While they flesh out her character and situation a bit, they pull us away from Yuki and Shimooka. I kind of liked the notion of just seeing her life through the lens of the men having to watch her and the ideas they develop about her. The voyeuristic nature of what they are doing is sometimes explored--such as in two different scenes where they follow Sadako--but I wish we had seen the characters grapple with it a bit more. As it is, the main reflection comes at the very, very end of the film.

An interesting concept, but I wish it had been a little more pared down.