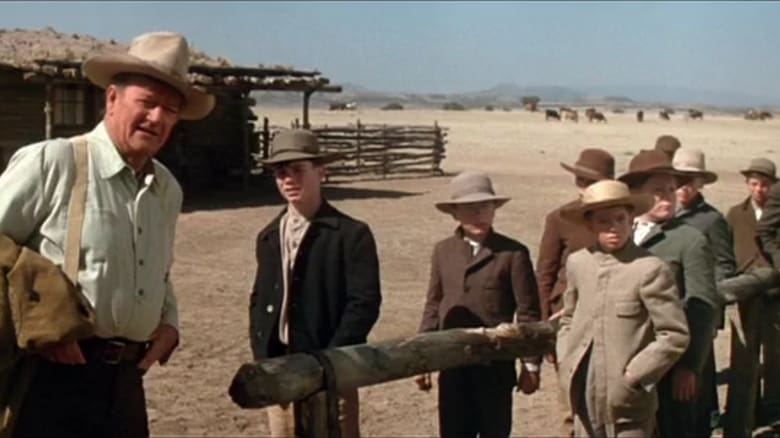 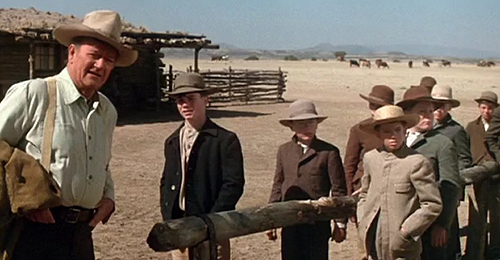 
John Wayne has more dimensions to him than meets the casual observers eye. Here in The Cowboys we see he's tough as nails on the outside while having a soft spot for the boys he hires (hmm, that sounds odd!) What I mean to say is: he's lost his own two sons and has now grown old. His concern is for his wife's well being and later for the welfare of the boys he hires to work for him. He comes to think of them like his own sons. So unlike other of Duke's films we see a softer side, we see a man who loves his wife and is even gentle and kind to her.

I loved the way the film takes it time and never rushes. It allows us to spend time so that we can feel we're a part of the story. A lot of movies just don't linger on the moment, The Cowboys does and does so at the right times.

The other impressive thing is the actual cattle drive. Think about it, this isn't CG crap and it's not just close ups of three cows in somebodies pasture. We see a large cattle drive in stunning wide angle, distance shots as they travel through the vast country side. I mean we see a lot of terrain, and it's easy to forget how hard on-location shooting is for the film maker, especially when done in so many different and rugged landscapes. Most films today would not have spent the time and money to do this.

Oh, big shout out to the best psycho-bad guy around, Bruce Dern! Damn! he was impressive as the unhinged cattle rustler...very believable and so very daunting.