I recently saw Epic Rap Battles do The Joker vs. Pennywise and while I was impressed by the Joker impersonation, the Pennywise one seemed super weird to me because my only familiarity with him is Tim Curry's version. Considering how well ERB generally manages impersonations, I decided to see for myself what the It remake was all about.

"And look at this mother****er!
He's leaking hamburger helper!"


Now I've never seen the original It miniseries, but I feel that I've seen sufficiently thorough video reviews to have a general impression of Tim Curry's Pennywise performance and the movie(?)'s narrative focus.

This is plainly a very different take on the concept and with, perhaps, a very deliberately different impression of how to present a movie with this concept.

Perhaps because of Stephen King's intimate involvement with his own miniseries, they seem to have an agonizingly persistent emphasis on the recurring themes in his books, including violent bullies, drunk dads, accosted writers, and Maine. All of the adult drama that seems to exposit on these mostly unnecessary themes is practically non-existent in favor of focusing on the experiences of the kids central to the story.

This makes a lot of sense for keeping an audience engaged, however the remake clearly struggles with this because the kids onscreen roughly half the time sound nothing like kids this age would talk in real life. These kids look like they're in middle school and one of them just straight up is a research expert on the town and actually begins sentences with "So, according to my research" with seemingly no self-awareness.

Perhaps the most realistic one is the comedy relief who bombards the other characters with immature opportunistic jokes about dicks and "your mom". This character could easily be very annoying but they come off as a legitimate personality one of these kids could have and at times manage to be just a little bit amusing. I think part of the reason this works is because it's all directed at his friends and not as some heavy-handed wink to the audience, and even his friends have little patience for his ****.

One of the kids that simply didn't work for this movie was Token Black Kid. At first I wondered whether they could succumb to or subvert the trope of The Black Guy Dies First, but it takes an unusually long time for him to even join "The Losers" and even when he does he never develops any sort of relationship with the other characters, unlike Main Girl, and yet he arrives armed with a boltgun when they return to confront the clown when Main Girl goes missing even after literally saying "I should stay an outsider". Clearly something is missing here. 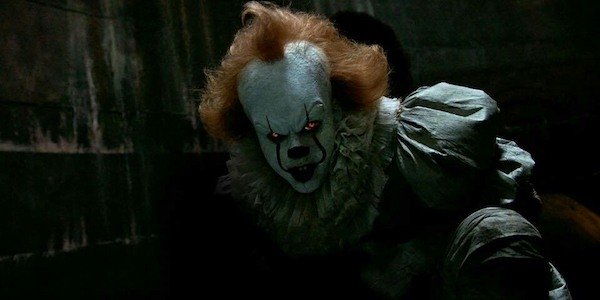 I don't even understand what the deal is with Main Girl. They heavily imply that she's sexually abused by her dad, if only to reincorporate him as one of Pennywise's shapeshifts later, but after saying she's had one kiss before she gets two kisses from two different characters on two separate occasions. The first which was setup as a blossoming romance and culminated in a rescue scene, and the second which closed out the movie but with no reconciliation between these two potential love interests.

Also have I said that kissing is stupid and that I have no sympathy for any character that boltguns sheep?

Token Black Kid's slaughterhouse subplot seems to exist for no reason other than to imply the presence of cruelty early on and I see no merit whatsoever in any of this "Oooooh, that middle school kid totally kissed that adult trying very hard to be a child actor!"

...okay I just looked her up and apparently she was 15? when she was in this role? She looks far and away older than the rest of the cast in my opinion and it was very distracting. I think those scenes with the boys oggling her wouldn't be quite so weird if in the back of my head I wasn't thinking "Gotta wonder what that 24-year-old is doing in her underwear with a group of tweens."

Also, HUGE thing that goes completely overlooked: Comedy Relief goes on a whole spiel about the risk of AIDS and the movie ends off with every character slitting their palms open and holding hands.

Yeah, just get all that blood up in my open wound. I don't know if they all cut the same hand, but that immediately what I was thinking when I saw that scene, and I might not have thought about it had you not mentioned AIDS earlier in the movie. Also, ritualistically slitting your palms open with a piece of broken glass to emphasize a promise is really ****ing stupid. Honestly. Just immediately drops my opinion of every character's intelligence by a good margin.

Pennywise isn't scary. The whole movie isn't really what I would call scary. Creepy, yes, but I didn't get that insufferable horror vibe I get from most horror movies, which is to this movies credit, I feel. Now, I really like Tim Curry, and it's hard to outdo Tim Curry doing Tim Curry, but for the purposes of this movie, I think the new Pennywise was a far better monster. Part of it is certainly just the personality going into it, in this case, Pennywise is considered to be just as childish and fear-prone as his victims, so when he's defeated by a group of kids ganging up on him, it feels less contrived.

His manner of speaking felt very inconsistent too, and while in part it was because he was imitating his previous victims, it still at times felt like his candence would shift unusually, and not even in a way that would serve the character as being unsettling.

Beyond that, he's definitely helped by a significant dose of special effects which allow him to bend, morph, and contort in disturbing ways. Seeing the scene in which he unfolds out of a cabinet to then tauntingly dance over to one of the kids was what sold me on seeing the whole movie. It's definitely a movie to see for the villain performance if nothing else.

My grievances beside cannot be assuaged though, however a certain Chapter 2 may manage to improve.