Slave of the Cannibal God 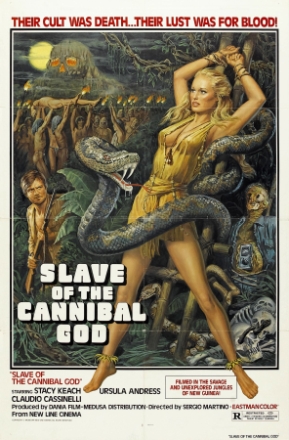 I'm quite fond of these cannibal exploitation films. They combine Indiana Jones-style adventure with sleaze and gore and male castrations. Slave of the Cannibal God (also known as The Mountain of the Cannibal God) isn't as hardcore as later entries in the sub-genre, like Cannibal Ferox or Cannibal Holocaust (possibly my favorite horror film of all-time), but it's still brutal, nasty and perverse.

Most people condemn these cannibal films for containing real-life animal killings. Those particular scenes might be hard to stomach, but, in my opinion, they add to the effectiveness of the horror. I think that when you've seen real deaths occur on screen, it temporarily tricks the mind into thinking that the actors themselves are in danger, that the stakes are for real. With the exception of an iguana that's gutted and eaten, most of the animal killings in Slave of the Cannibal God are a result of other animals, even if it's obvious that the animals were pitted against each other by the crew. For instance, in one scene, a monkey is thrust into the mouth of a python. The helpless, resigned look in the monkey's eyes as its skull is slowly crushed by the snake's jaws is by far the most haunting moment in the film.

Cannibals don't appear until deep into the run-time. That might be a detriment to some viewers, but I enjoyed the journey along the way. Slave of the Cannibal God is just as much about man vs. nature as it is man vs. flesh-eaters. I love how the jungle essentially becomes its own character in these cannibal films. The exotic locales add an authenticity that can mask the flat acting or poor dubbing or whatever other flaws typically come with the sub-genre. Stacy Keach gives a better-than-usual performance for an exploitation film. Former Bond girl Ursula Andress is her usual bland self, but she seems undaunted by the physical challenges required of the role, so kudos to her for that. The gore is excellent.

Compared to its cannibal peers, Slave of the Cannibal God is relatively tame, but it more than makes up for it with an insane climax that threatens to overwhelm viewers with bizarre, perverse imagery. There's an extended sequence of topless tribeswomen rubbing an orange goo all over Ursula's naked body as part of some weird, pre-ritual foreplay. A long, lingering shot of a woman finger-banging her pubic jungle. A severed penis. Disembowelment. Cave orgies. A deranged cannibal midget. Then one of the most memorable images I've seen in awhile: a tribesman raping a giant pig. It was at that moment that the film officially won me over. 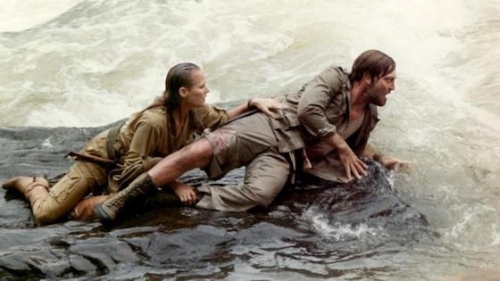