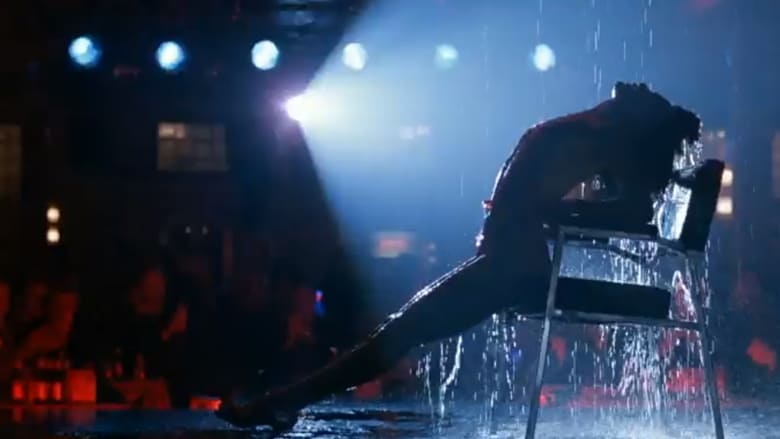 by Gideon58
posted on 1/09/19
in
Flashdance
From the "Style over Substance" school of film making comes Flashdance, a sizzling musical drama that was the surprise box office smash of 1983, redefined movie and fashion trends, but most importantly, established Adrian Lyne as a director to watch. 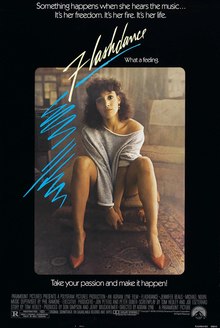 The story, such as it is, follows Alex (Jennifer Beals), a girl who works as a welder by day and dances in a club at night in downtown Pittsburgh, though she has never had any formal dance training. One night at the club, her day job boss, Nick (Michael Nouri) catches her act and decides he wants to start dating her, which turns out to be a lot more complicated than he expected. Despite her lack of training, Alex also yearns to audition for an elite dance repertory company and keeps coming up with excuses not to. 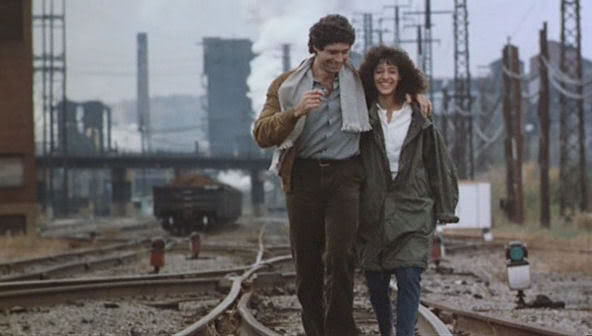 Yes, this is my first viewing of this film and as for why I waited this long to watch it, it just seemed like a silly idea for a movie and never really interested me. What did appeal to me and pop off the screen for me as I watched was the undeniably stylish direction by Adrian Lyne, the man who directed Fatal Attraction, Unfaithful, and 91/2 Weeks. Lyne not only has an unerring eye for creating striking cinematic images but there are few directors out there with a better eye for erotic cinematic imagery...the undoing of her bra under the sweatshirt, the removing of her dinner jacket to reveal the front of a tuxedo shirt without the rest of the shirt, and best of all, how does anyone not get hot watching Jennifer Beals eat lobster in this movie? Speaking of sweatshirts, this was also the movie where the off-shoulder, ripped sweatshirt look was born and became the only way for dancers in the 80's to appear in public.

On the other hand, the swiss cheese screenplay did provide several questions that nagged at me throughout the film. Number one, this woman dreams of being a dancer but has never taken any classes? WHY THE HELL NOT? If you want to be a dancer, you have to take class. And if she's never taken classes or danced professionally, what the hell did she put on that 20 page application for the rep company? And most important of all, Nick couldn't have forgotten how difficult it was to get Alex to go out with him. Why would he think she would be OK with him making a phone call to the arts council on her behalf? And who is Alex to drag her BFF out of a strip club because it's not "real dancing"? The film does feature some terrific dancing though, even if Beals isn't doing all of it, to a fantastic song score. Her opening number with the famous water-dunking, filmed almost exclusively in silhouette, is smoking hot. The scene to the tune of "Maniac" was interesting, though I didn't get the appeal of watching Alex's wet and sweaty hair flying all over the place. And the final audition piece danced to the Oscar winning title tune, might have been a lot more effective with a real dancer performing it...I've heard over the years that four different dancers were utilized in this scene and, unfortunately, it's pretty obvious. Mention should also be made of Cynthia Rhodes, who would later heat up the screen with Patrick Swayze in Dirty Dancing, and has an electrifying number here, mounted to the tune of "Man Hunt." Jeffrey Hornaday's choreography is razor sharp, far superior to his work in the film version of A Chorus Line.

Jennifer Beals is a pretty girl, but so much of her performance comes from other people, it's hard to accurately gauge her as an actress, but when was the last time you saw her in a movie? The prosecution rests. Bouquets to the film editing as well, but more than anything this film is a testament to the dazzling cinematic eye of Adrian Lyne.
» More about Flashdance
» More reviews of Flashdance
» More reviews by Gideon58