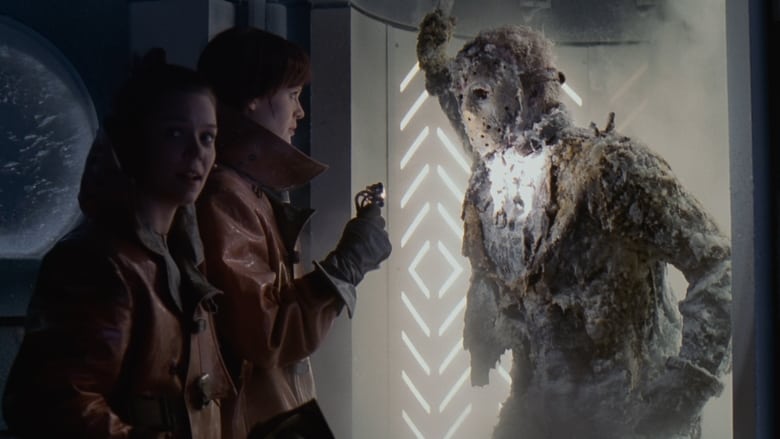 Yeah I know I just started that review with a heart symbol. But SERIOUSLY, they referred to Jason in the previous movie as having had an unusually large heart. In this, an unusually small brain. GUYS, HE'S ALL HEART, NO BRAIN. What's not to throw heart symbols at?

I mean, apart from the "get out of the way once you resurrect him" kind of thing. Also, sad this is Kane Hodder's exit as Jason. Not even he knew it would be. But that's another rant for another time.

Soooo, Jason in space. Yeah, well why not punt him into the sun, or whatever it is studio execs do to Jason without regard for Jason fans yet keep us happy while we're all waiting for Freddy vs Jason to be a viable thing.

Hey, I'm on board this Nostromo. The premise of this one is that it's 2010 and the US government (which has a research facility in Camp Crystal Lake..why????) has iced Jason for research purposes, but some how he ends up catapulting him into space because of reasons, and 445 years later he's these these curious monkeys' problem. **** goes wrong and the body count goes sky high.

Things I liked AGAIN - IN ONE LONG UNCONSCIOUS RAMBLE: (not arsed to put this in spoiler tags. I won't mention names except Jason, so...if it's egregious, I'll wrap it. Like a fine, upstanding member of society.

) Things I liked?: The epic Jason side-eye. With his only eye.

Not only that, but a couple of imaginative kills, including one in my top 3 Jason kills, namely the cryogenic face smash.

LORDT HELP ME but that was perfect, even if Mythbusters busted that as possible. The ****s. Never watching them again.

THEY CAN NEVER TAKE MY SLEEPING BAG KILL. And this one features a
View Spoilers
WARNING: spoilers below
double sleeping bag kill just for ****s and giggles.

Added to the "screwdriver" kill, it's like someone woke up and remembered we love fun Jason kills with the damn hockey mask. Ugh. I adore this Jason. I just...adore this Jason and I'm not ready to say goodbye to him as Jason.

Thank god for conventions. At least you can get your throat grabbed by the real deal if he happens to blow into town every decade or so. I missed him the last time. I'm obviously still not over it. I 'm actually so happy they gave his last as Jason the highest body count. **** it, give it to Kane. He's the soul of Jason, oxymoron that that is. He's just...I don't know. Maybe you just have to be my kind of crazy to get it.

I could list kills, but really, this is a feast in the off(er)ing. Just lay back, relax, DON'T WORRY ABOUT PLOT, he's in space, he's super-charged, and the governement can't help you. But there IS a hot fembot that appears to get off on getting rid of Jason...temporarily.

OK BACK TO RANDOM LIKES: The David Cronenberg cameo. He's a terrible actor, and I love it.

The fact that Jason basically thrusted the Lexa Doig character into cryogenic breach...I can't even. *fans self* Did I mention the abundance of good kills? Yeah, there's that. The fashion - guys. open midriffs in space is AMAZEBALLS, just sayin'. "Bring on the ants."

Things I didn't like: The whisps of stringy hair. GTFO with that. Über-Jason's red eyes. Why - he's jacked enough. The cute shuttlecock-styled space pods. Just...what. The cheese factor was a touch overdone, but just a touch for this kind of film.

Yeeaaah nooo, kinda dug this. It was silly, but it paid me service. Can't really knock that. Overall, this is actually a fun movie, once you just go with it. Overall it was fun, and if you're a Jason Voorhees fan, you'll get some pay-off. If you're not in this for that, then this isn't really for you, it'll just be background noise. But for me, it was enough for a