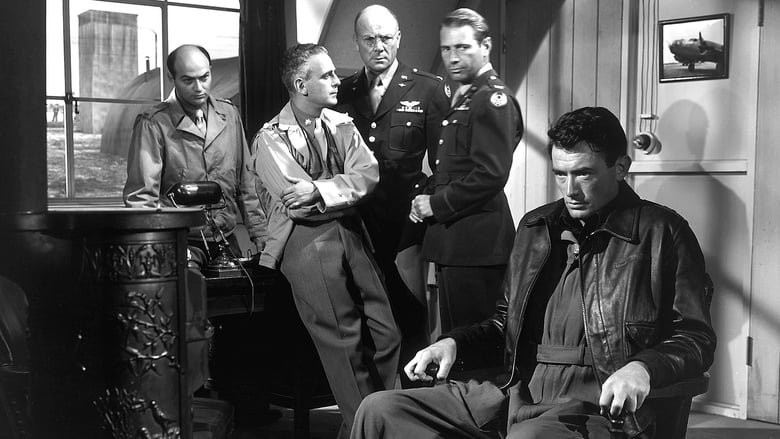 Terrific film about the psychological and physical hardships which American pilots had to undergo during the height of WWII when they were forced to bomb Germany during the daytime, often in good weather. The number of flights required of each man continues to rise even though more and more of them are "cracking up" from the pressure and the trauma of seeing their brethren shot out of the sky. The film is told in flashback as Adjutant Major Stovall (Oscar Winner Dean Jagger - Best Supporting Actor) returns to the now-barren English airfield in 1949 and relives what happened in 1942 and 1943 with his group. The popular commander, Col. Davenport (Gary Merrill), isn't getting enough precision bombing out of his men (or so headquarters thinks because they believe him to be too friendly with the men), and he's replaced by the "sterner" General Savage (Gregory Peck), who's immediately confronted by an entire group of unhappy men who all want to transfer out of his outfit because they think what's happened to Davenport is unfair. Savage, with the help of Stovall (he "loses" the transfer paperwork) is able to bring the men around eventually and proves to them that they can do things which are seemingly impossible and needed if the Allies are to win the war. What makes Twelve O'Clock High still so potent is that it's all about the people who have to risk their lives on a daily basis for the good of humankind. It's definitely not a gung-ho war film; in fact, it's a very potent anti-war film, but it's one of those films which makes the case that some wars are necessary and have to be won, no matter what the cost. The fact that the cost is the blood and broken bodies of men and the never-ending heartbreak of their families is just one reason why it's a classic film, not just a classic war film.
» More about Twelve O'Clock High
» More reviews of Twelve O'Clock High
» More reviews by mark f