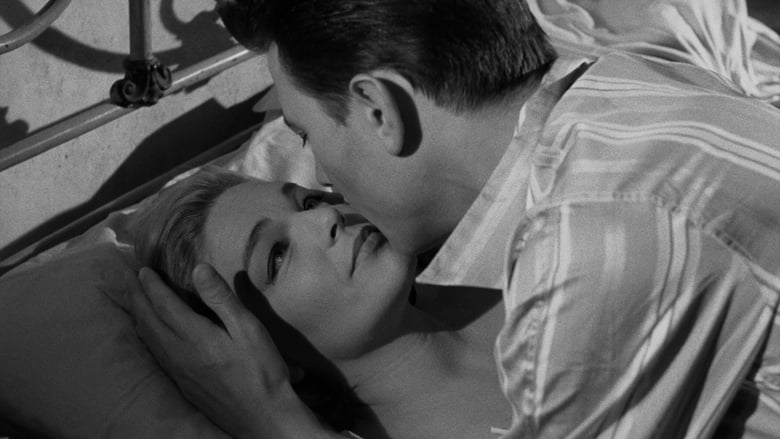 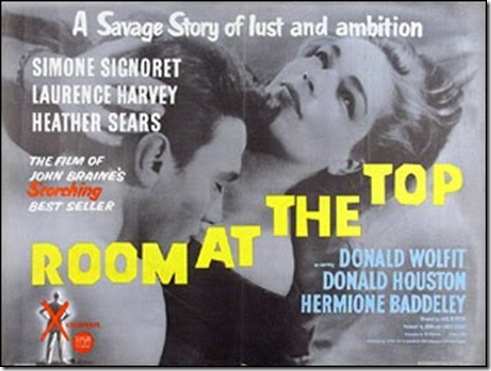 That's a good poster so I wanted to show it even though it's a bit misleading as to what exactly occurs in this film, another powerful one about people trying to live a life which is somewhere between reality and wish fulfillment... or is that reality and a nightmare? Joe Lampton (Laurence Harvey) moves from his lower class town into the city to take a better job and he immediately picks Susan (Heather Sears), the daughter of the wealthiest man "at the Top", as his future bride. Joe doesn't have any silly emotional connections to love and marriage; he just knows that he's had 25 years "without", so he wants to make up for it by getting as many years as he can "with" money and all that money can buy. Of course, Joe will have to overcome Susan's family and boyfriend. Meanwhile, Joe takes a liking to older Frenchwoman Alice (Simone Signoret, well-deserving of her Best Actress Oscar playing one of the most vulnerable, yet passionate women ever on the screen) who's trapped in a loveless marriage. Eventually Joe and Alice begin an intense affair, both physically and emotionally, even though Joe never wavers from his plan to have Susan.

This film, which is certainly one of the more powerful dramas, is crammed with witty, satiric dialogue which helps to build up the point that most everybody lets everybody know what they really think of each other. Of course, Joe has to keep secrets from both his women, and as things come to a shattering conclusion, Joe is the character who seems to grow the most, or does he? It'll be up to you to decide what the ending truly means but to me it means "Masterpiece". This is the kind of film which might be considered a soap opera except that it doesn't whitewash, sell or overly emote anything, except for superb storytelling and filmmaking, courtesy of director Clayton (The Innocents).
» More about Room at the Top
» More reviews of Room at the Top
» More reviews by mark f