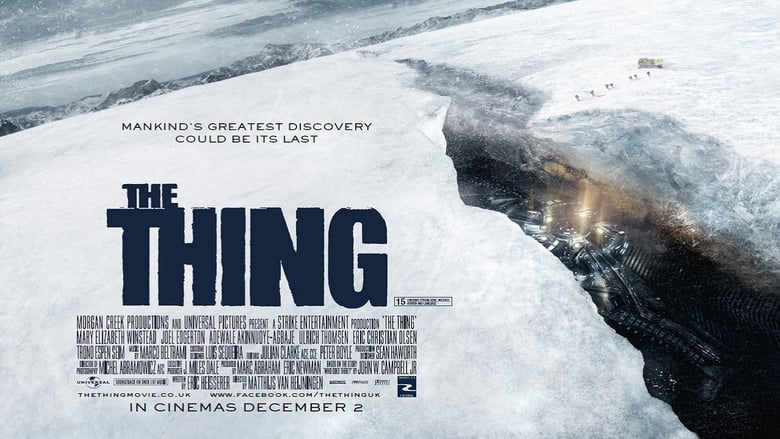 The Story
Firstly this movie is not a remake of the 1982 version, its a prequel. And i only found that one out myself when this movie had finished. Why the hell they even called this movie The Thing i'll never know. They could of just went with The Thing: The Beginning, or even just Thing. But nooo they like to confuse people, so now i'm going to have to give the original movie a watch aswel now. Anyway, The Thing (prequel) was actually not a bad movie. It's not great, but it's pretty entertaining and offers a few scares along the way too. I did feel like this movie rushed along a little to quickly, and i thought some of the characters could of been explored a little better, but it's a horror movie so what do you expect; their pretty much just bait anyway.

Movie Trivia;
An enormous number of screen shots from the first movie were kept on the set while filming at all times, in order to ensure that the Norwegian station would be rebuilt to the smallest details.

The filmmakers used Kurt Russell's height as an estimate as to how big the sets would have to be to faithfully recreate the Norwegian camp as no blueprints existed from the John Carpenter movie.

The producers convinced Universal Studios to allow them to create a prequel to John Carpenter's The Thing (1982) instead of a remake, as they felt Carpenter's film was already perfect, so making a remake would be like "painting a mustache on the Mona Lisa". However, the prequel still has the title of the original film, because they couldn't think of a subtitle (for example, "The Thing: Begins") that sounded good.

The creature effects were done primarily with cable-operated animatronic robots on the director's insistence, since it would improve the performances of the cast if they saw what they had to react to. Computer-generated images were used to add elements to the animatronics (such as tentacles), or in some cases, to replace the entire animatronic if it didn't behave convincingly.

The Cast
The Cast are pretty meh. There is literally no character development so it's pretty hard to care for any of them when they are being killed off. But like I mentioned above, it's a horror movie and the cast/characters are pretty much just pawns anway.

Movie Highlight
My movie highlight was The Thing itself. It's some sort of Alien creature that looks like a crab.... a really fu**** up crab. And some of the killings are actually quite brutal and hard to watch (ask my girlfriend), but The Thing itself does look awesome, and i liked that we got to see a lot of it throughout the movie.

My Verdict
Overall i thought this movie was okay. It's not great, but it does have some pretty cool moments. I'm afraid to say it does rely on some cheap scares tho, but what horror movie doesn't these days. I'm gonna go and check out the original movie now and see what all the fuss is about.