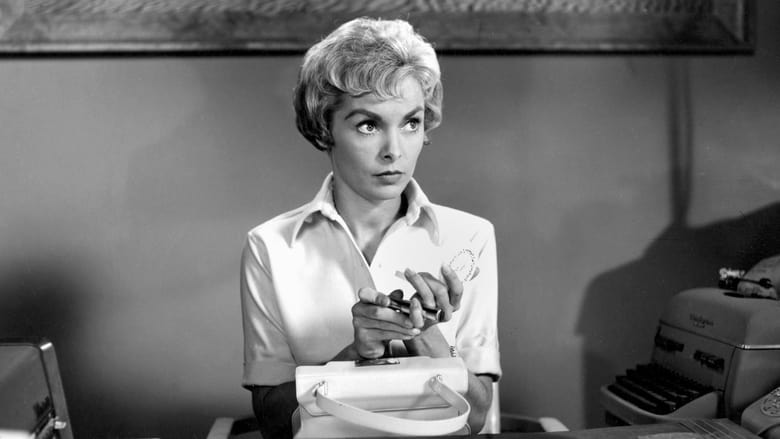 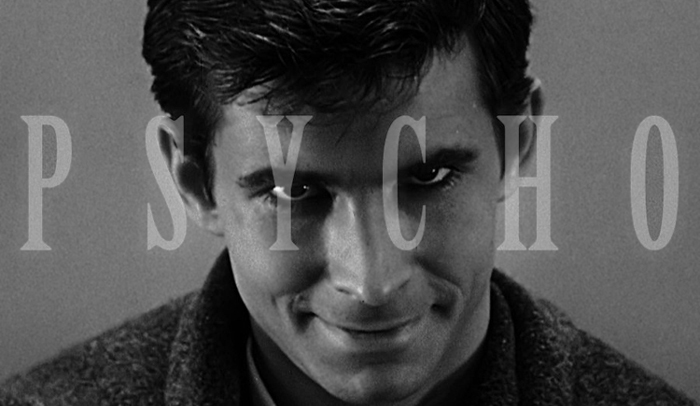 
Psycho...the guts of the movie


Fans of Hitch's 1960 horror cult classic have watched Psycho so many times that they know by heart every scene, every word of dialogue and each nervous glance by Norman Bates. Hitch is the master, so what else can be said?

A lot! Psycho is the result of many talented people who came together to tell one of the screen's most vivid horror stories.

Psycho starts not with Hitchcock but with a real life, grisly murderer
Ed Gein, who in 1957 was arrested for the murders of two women. In his home, police found artifacts made from his victims body parts. Most disturbing was clothing made of human skin. Psychiatrists came to the conclusion that the psychotic murderer was trying to make a woman suit to wear, so that he could become his dead mother! His mother had dominated him in life...and also in death. Obviously he inspired more than one classic horror film classic.

Living just miles away from the murder was a novelist working on a suspense thriller murder book. Robert Block published his novel Psycho in 1959. Also in 1959 Hitch was nearing completion on North by Northwest and was looking around for his next project. Reading the book Psycho on a flight over to England, Hitch then decides that this would be his next movie. 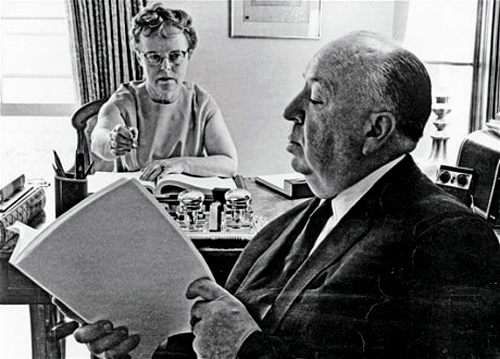 Hitch Goes Roger Corman style: Hitch notices that a certain movie producer is churning out low budget, low quality horror films and making lots of money at it. The fans love them, though the critics don't.

Paramount studio has Hitch under contract for one more movie but they were nervous about making a big budget film from such a controversial book. This forces Hitch to use his own production company Shamley Productions...which then gave Hitch the opportunity to make one of those Roger Corman type movies, with a small budget and lots of grisly bang for the buck.

Joseph Stefano...most people don't know that name but they should. He's the screen writer who created Norman Bates and wrote the screenplay for Psycho. Some of the film's legendary status rightly belongs to him.

Stefano was a new kid on the block and Hitch disliked working with new writers, so Stefano knew he had to sell Hitch on his story treatment. He did that by solving one of the stories main problems: how to keep the audience feeling empathy after Marion Crane is killed off in the first quarter of the film.

The original Normal Bates in the novel and in an earlier screenplay had been a middle aged, balding, quiet man who was a homicidal murder. Hardly the kind of character the audience would warm up to...but they needed to do just that, as Marion is out of the picture right at the start...So out of that need is born a young, quirky and even likable Norman Bates, who exist thanks to Joseph Stefano.


Hitch's style, Hitch is known as a technical director who creates his movies in his head even before he starts shooting. Hitch works from storyboards and plots out each camera shot, leaving nothing to chance. The camera angle, the distances to the actors, the lighting, the lens focal length and camera movement is all done according to Hitch's master plan.

One thing Hitch is not known for is micro managing the film. He takes a hands off approach to both the script and the acting. Relying instead on choosing talented people who can do their job well.

Screenwriter Joseph Stefano tells the story that: one day in Hitch's office he asked Hitch about one of the story character's motivation for doing what they do. Hitch replied in his usual calm and cool manner, 'Joseph, that is for you to decide.' 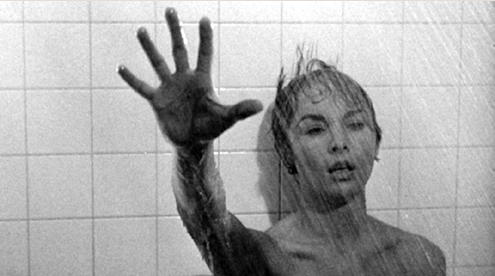 Janet Leigh also said in an interview, that Hitch wouldn't give her specific acting directions. Which is something other actors have said about him as well. Instead he left it up to her to interpret the script as she seen fit. But he was strict about one thing! Janet had to stay within the camera frame and not improvise by moving out of the frame. The camera dictated the scene, not the other way around.


"The Hitchcock touch has four hands, and two of them are Alma’s."


Alma Hitchcock, Hitch's wife and partner in the movie making business. Alma had a big influence on Hitch's film including Psycho. She would let Hitch know if his next movie idea was a good one. If Alma liked it, it got made. She read and approved of Stefano's script and the next day Hitch tells Stefano that Alma liked the script.

Alma was also in on casting and approved of the actors selected. Hitch always listened to her. In some ways Alma is the chairman of the board. She even sat in on editing. Much of Hitch's touch is Alma's. 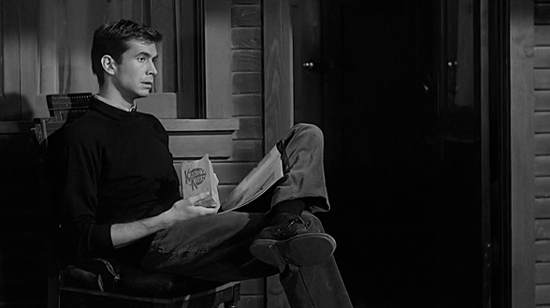 Anthony Perkins, when Stefano was writing his updated script of Psycho he had in mind this young stage actor as Norman Bates. At the start of production Hitch tells Stefano that Anthony Perkins is going to play Bates. Stefano couldn't believe the coincidence.

If Anthony Perkins hadn't been cast as the twisted but likable Norman Bates, I wouldn't be writing this review. He's that important to the movie. Perkins performance is the soul of Psycho! His improvisations of a nervous stuttering young man, under the thumb of his mother, is the stuff of movie legends. Reportedly Perkins engrossed himself so deep in the role he had a hard time shaking the specter of Bates after filming was over.

Janet Leigh, Hitch decided the role of Marion called for star power. No doubt he was familiar with her work from Orson Welles' Touch of Evil (1958), in which Janet Leigh played a woman held captive in a hotel room, while wearing not much more than her lingerie. Poor Janet, needed to stay away from motels!

Her role is brief as she's killed off towards the start of the film, but her part is pivotal. We get to see her at work at a bank, as she takes a wad of money from a rich and leering Texan. This is also when we see Hitch's daughter Pat Hitchcock, who provides some lighter moments that helps to take us off guard so that when the infamous shower scene takes place it has maximum effect.

Other Actors...It's easy to focus on Anthony Perkins and Janet Leigh but there were other actors who helped shape the movie. Vera Miles plays Lila Crane, the sister of Marion who goes looking for her. Vera was slated to star in Vertigo but had to drop out due to a pregnancy. Vera has a small but pivotal role and adds depth to the film. I can't say the same for the actor who played Marion's boyfriend John Gavin...who comes across more like a Hollywood leading man than an actual character. However what Gavin lacks, Martin Balsam makes up for in his role as an investigator who's come looking for Marion and the $40,000 in cash she has stolen.

Bernard Herrmann...his name might not ring a bell but his music score for Psycho sure does...rheee! rheee! rheee! We all know that music from the shower scene that screeches terror at us. Herrmann made a bold decision and scored the movie only with string instruments. He explained he wanted a stark black & white sound to match the starkness of the movie. The screeching violins give an effect of fingernails being raked across a chalk board...very effective! 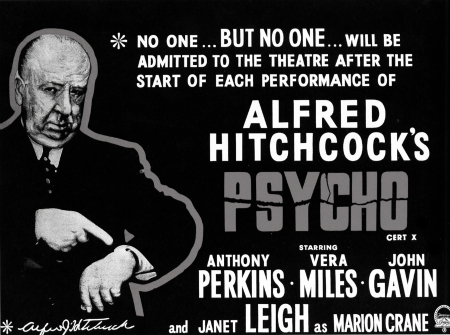 The other big factor, that made Psycho an instant hit was it's highly creative and unusual ad campaign. Hitch insisted that all the theaters showing Psycho would agree to not allowing anyone to be seated once the movie had started. This was a very big deal...it was on the posters at the theater and in the newspaper ads. In some cases people even stood in a special queue line with prepaid tickets, just to make sure the policy was adhered to. The public were also told not to reveal the ending. This much sensationalized hype, generated even more interest in Psycho.

Does Psycho deserve all the praise that's been heaped on it over the years?...Well we're still watching it...and still being amazed by it! and that says a lot!